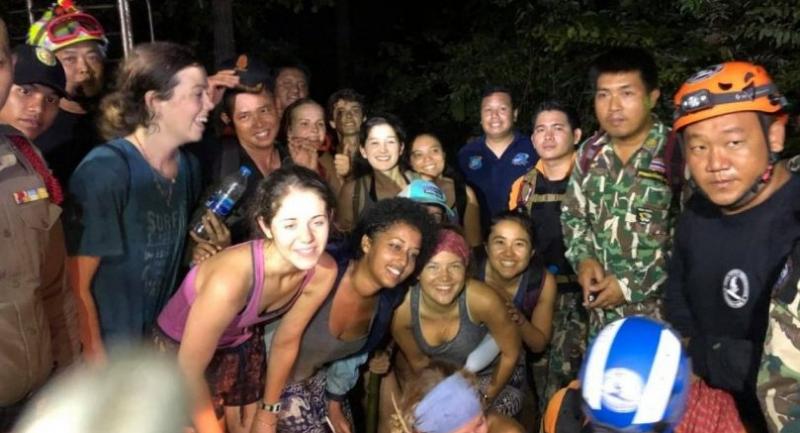 A group of American exchange students got lost in a Chiang Mai forest, strayed to the edge of a cliff and had to be rescued by officials early on Thursday.

Fortunately, the Nok Kok Cliff above the Tad Mok Waterfall has a mobile phone signal, so the students, one boy and ten girls, managed to call tourist police at 7pm on Wednesday evening for help and officials tracked their GPS to rescue them at 10 minutes past midnight. After the rescue, the students, who are aged from 18 to 22, said they were exchange students studying at the Faculty of Science at Chiang Mai University and had arrived in the northern city six weeks ago.

They said they had hired a red song-taew minibus from Chiang Mai University to the Huay Tueng Tao Reservoir in Tambon Don Kaew, Mae Rim district and started walking along the forest track heading to the waterfall at 2pm. But they later found out that they had strayed off the track and got lost so they called Chiang Mai tourist police for help.

Col Supakorn Ruansati, manager of the Huay Tueng Tao Reservoir Tourism Office, said after the tourist police told him about the incident, his staff used their mobile phone number to search for their GPO location and managed to send help.

When the officials located the tourists, they warned them to stay still as they were on an 80-metre-tall cliff and could easily fall.

Rescuers then dispatched four-wheel pickup trucks to rescue them. The pickups drove for about four kilometres from the first forestry checkpoint and walked 800 metres to reach the students. Once the students were taken out of the forest to the tourism office, they cheered and several cried and hugged the officials in appreciation.

Supakorn said the Huay Tueng Tao Reservoir normally closes at 6pm, when officials check whether all tourists have come out of the forest but the group had gone off on their own without informing the authorities first so the officials did not know they were there until they called the tourist police.