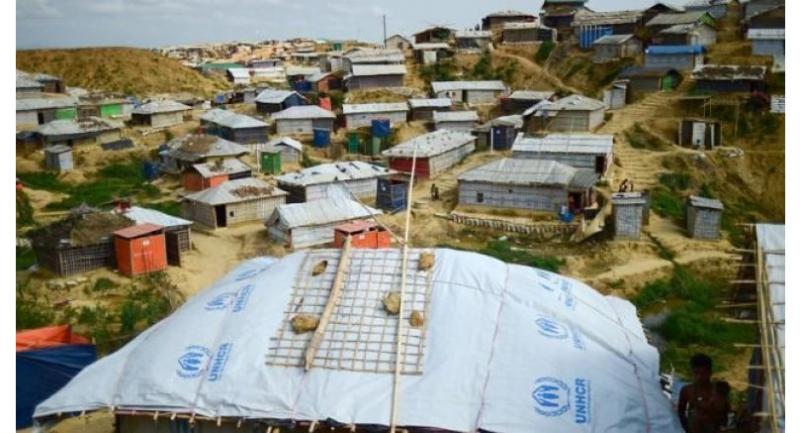 In this photograph taken on May 7, 2018, sand bags are seen on the roof of a shelter to weigh it down in preparation for the upcoming monsoon season in Kutupalong refugee camp in Ukhia. Photo: AFP

Bangladesh's Foreign Minister AH Mahmood Ali has expressed hope that the first batch of eight thousand Rohingya people would be able to return to their original villages in Rakhine State of Myanmar soon.

Citing the issue of forcibly displaced Myanmar nationals who took shelter in Bangladesh, Minister Ali expressed his gratitude to the international community for their continued support to Bangladesh for resolving this complex issue with Myanmar.

He made the remark while delivering his statement in the second plenary titled "Reinforcing the multilateral system: advancing the ASEM partnership on global challenges" in Brussels on Friday, according to foreign ministry in Dhaka.

The 12th Asia-Europe Summit (12thASEM) was held in Brussels on October 18-19 with the theme" Global Partners for Global Challenges.

In his speech he projected before the forum Bangladesh's democratic, secular and progressive identity as well as her effort to promote global peace, progress and prosperity as envisioned by Father of the Nation Bangabandhu Sheikh Mujibur Rahman.

He also stressed the need forcreating great connectivity between Asia and Europe in order to develop infrastructure, institutions and people to people contact for overall progress.

Leader from fifty-three ASEM partners attended this grand Summit. In the summit it is decided that Cambodia will host the next ASEM Summit in 2020.

There were two plenaries and one retreat sessions altogether during the summit where leaders of Asia and Europe exchanged views on contemporary issues of global importance such as SDGs, Migration, Climate Change, Cyber Security, Fair Trade, Women Rights, Forcibly displaced people etc.