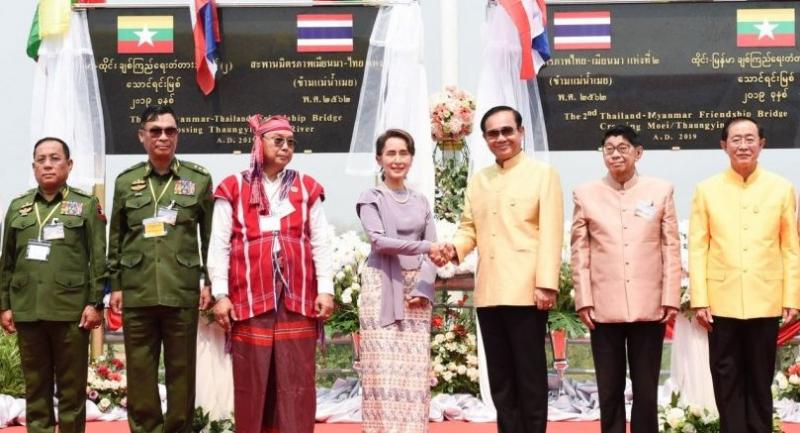 The second Thailand-Myanmar Friendship Bridge linking Thailand’s Mae Sot district and Myanmar’s border city of Myawaddy on the Thai-Myanmar border has been officially opened to facilitate cross-border transport of goods and people.

Prime Minister Prayut Chan-o-cha and Myanmar State Counsellor Aung San Suu Kyi presided over the opening ceremony held on Tuesday in the middle of the bridge.

During the ceremony, Prayut said the bridge reflected the good bilateral relationship and emphasised the “natural strategic partnership” of the two neighbouring countries. As the head of Thailand’s government and the representative of its citizens, Prayut said he was glad that both countries would have another route for transportation to facilitate border development and seamless connectivity.

Spanning the Moei River between Ban Wang Takhian in the Tha Sai Luat subdistrict of Mae Sot with Myawaddy in Myanmar, the bridge has been constructed at a cost of around Bt4 billion and consists of a bridge, a 17-kilometre road in Thailand and a four-kilometre road in Myawaddy, as well as border control facilities. During the meeting, Prayut also asked Suu Kyi for cooperation in tackling haze and smoke across the border. The Myanmar State Counsellor said she realised the importance of the issue and would order her Environment Ministry to step up measures to tackle it.