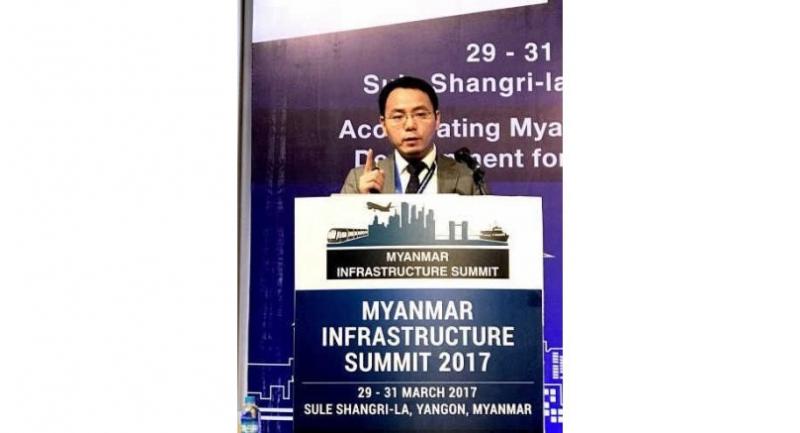 SINCE MYANMAR’S mobile-device penetration has improved from 86.2 per cent last year to 104.62 per cent, cooperation among all stakeholders needs to |be intensified, according to the third “Myanmar Infrastructure Summit” held earlier this week (March 29-31) from Wednesday to yesterday.

At the event, Lu Xingang, vice president of Huawei Network Solutions, urged Myanmar to promote infrastructure cooperation for further economic growth. He said it was time for the stakeholders to collaborate for highly efficient civil engineering.

Lu said win-win cooperation between telecommunication and utility companies that own plenty of non-telecom infrastructures could save construction costs and provide affordable broadband services to end users.

He stressed the importance of broadband infrastructure, which he described as the key enabler in Myanmar’s economic transformation.

He said broadband networks should be regarded as “fundamental infrastructure” to support upper-layer applications such as infotainment, distance learning, e-government and smart cities.

Increasing broadband penetration by 10 per cent would lead to a 1.38-per-cent increase in gross domestic product, he claimed. Internet-enabled industry has reshaped the landscape of traditional industry and improved production efficiency by 5-10 per cent, he said.

Nowadays, the tariff for basic broadband service in Myanmar is around US$30 (Bt1,000) per month with limited download capacity, equivalent to 20 per cent of monthly household disposable income. An unlimited broadband package can cost up to $90-$100, making such service a luxury for 95 per cent of Myanmar people and deterring the country from transforming into a digital society.

“Cost saving [during the] construction period could lead to dramatic price erosion for broadband service and make it more affordable to the public,” he said.

According to the Ministry of Transport and Communications, nationwide data usage accounted for 88.95 per cent of the population as of January 31. Myanmar now has 14,872 telecom towers. An additional 1,623 towers are being repaired, while the building of 441 new towers is on progress. A total of 35,362 kilometres of fibre cable has been installed nationwide, and an additional 10,730km is being installed.

“If these policy measures could put in place, the digital vision of Myanmar and [sustainable economic] growth could all come true,” he said.

According to the Myanmar Investment Commission, transportation and communications are third on the list of foreign direct investment by sector, after oil and gas and power. As of February 28, Myanmar had approved $8.12 billion worth of investment by 44 foreign enterprises in the transport/communications sector, accounting for 11.63 per cent of the aggregate FDI.