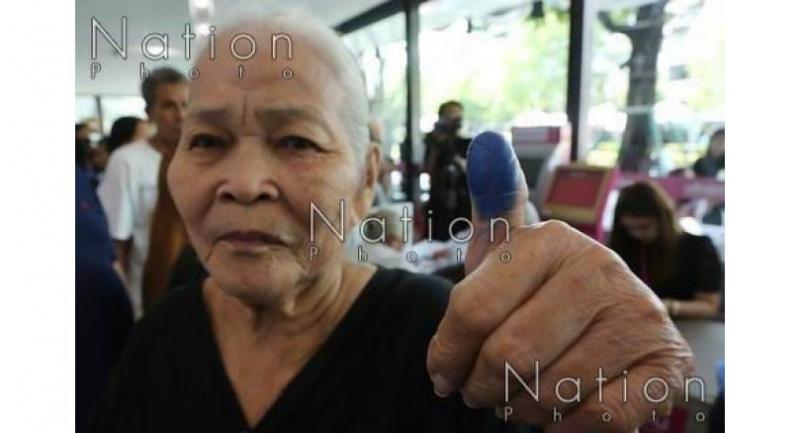 An elderly low-income earner gets ready for the second round of registration for government welfare, to be held from yesterday until May 15.

A LARGE NUMBER of low-income people queued up to apply for state welfare as the second round of registrations opened nationwide yesterday.

Finance Minister Apisak Tantivorawong said at least 10 million people were expected to register in this round, which ends on May 15.

After the registration, welfare cards will be given to those who meet the criteria, he said.

The welfare cards will be used to access privileges extending from free tap water, electricity, and fares on public buses and trains. The types of welfare provided will be different for urban and rural people.

In Nakhon Ratchasima, several people waited for a long time in front of a number of bank branches, including Krungthai Bank’s (KTB’s) Hua Thalae and Mittraphap branches, from early morning.

Prachoom Langmai, a 60-year-old motorcycle-taxi driver who lives on an uncertain stream of income, did not register as a low-income earner last time because he was uncertain over the government’s payment system. After acknowledging that his friends had received payments from the government, he rushed to register this time.

Three banks set up mobile registration services in Udon Thani, where a large number of people were seen queuing. The three banks were Government Savings Bank (GSB), the Bank for Agriculture and Agricultural Cooperatives (BAAC) and KTB.

Supawadee Sithimalairat of the Udon Thani Provincial Treasury Office said those registering were required to disclose information such as their income, their bank deposits, other assets and liabilities to the relevant state agencies so that they can set policies to assist low-income earners properly.

In Pattaya, Sudjai Kavichan, manager of a GSB branch there, said this year’s system was improved and about 100 people registered in the morning.

In Trang, there were reported-|ly some people waiting for docu-ments and receiving queuing |cards before BAAC opened in the morning.

Orathai Pochiew, a 32-year-old housewife with no income in Mueang district of Trang, was glad of the government’s assistance for the poor.

Rabeab Uden, manager of BAAC’s Trang branch, said a number of people registered and the bank was well prepared for one-stop services to save people’s time.

The bank plans to provide off-|site services in designated areas |in Mueang district from April 7-21 |to make registration more convenient.