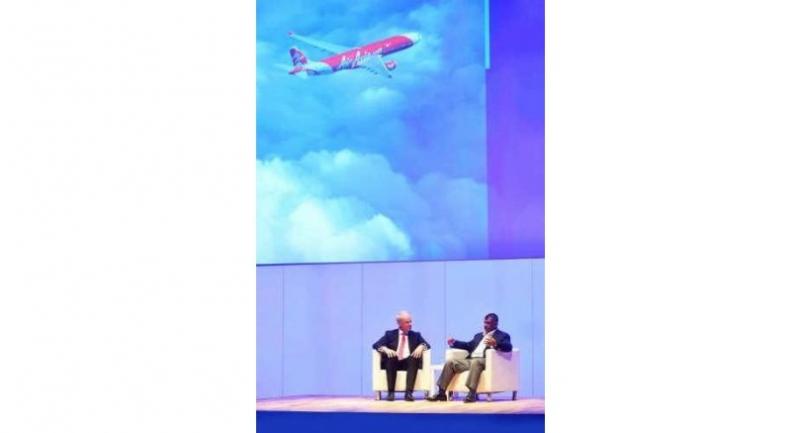 TONY FERNANDES, group chief executive officer of AirAsia, called for an open-skies policy, liberalised air-travel regulations and improved aviation infrastructure in Asia and beyond during his presentation titled “Responsible and Responsive Leadership” at the WTTC (World Travel and Tourism Council) Global Summit in Bangkok, which ended on Thursday.

“I am not an expert on the issue of the US and Emirates, but we are starting to fly to the US – Hawaii – so the more liberalisation the better. And let the market decides.

“Airlines have been destroyed because of restrictive trade practices, and tourism is about open access and making travel easier. So I don’t think Emirates or any other airlines should be restricted. It would be a step backward if protectionism came in, although I don’t think it will, as I hope common sense will prevail,” Fernandes said in response to AirAsia making inroads into the US market.

In Asia and elsewhere, there should be two types of airports like in the United Kingdom, for instance, where Stansted and Gatwick airports serve budget airlines while Heathrow focus on full-service carriers, he said.

“So I think infrastructure is struggling to keep up with the success [in Asia],” he said.

Joining Fernandes in a separate session, Gary Chapman, president of group services and Dnata at Emirates Group, concurred, saying: “If you make it easy for people to travel, they will travel more and drive wealth. Political [issues are] not the only challenge. There’s the issue of economic challenges too.

“If you are not able [to] adapt to changes, you are going to be a dinosaur and be left behind. The big three airlines in the US saw Emirates as a threat, but to be fair, they have also changed their business models and they have done it very well. But if you think your model is right for the future, I think you are going to be mistaken.”

Fernandes praised Asean as a huge emerging market for aviation, and Thailand in particular for being progressive and opening up in terms of foreign-business ownership. He said that with AirAsia, he was determined to increase connectivity in the region through joint ventures in a bid to expand the airline’s Southeast Asian network.

“Asean is a huge market. Thailand is the leader that’s becoming a more vibrant aviation market. It took me seven years to open the KL [Kuala Lumpur] to Singapore route because it had always been blocked. Now the region is talking about an open-skies policy.

“I believe in proactivity. I wouldn’t have been able to build connectivity in Asean without joint ventures,” he said.

“Sixty percent of our routes are the ones that we have never done before.

“But we have been innovative in developing routes and connecting points.”

Fernandes said he had wanted to own an airline since he was young.

“It may seem a crazy idea for a 12-year-old sometimes. There’s a thin line between stupidity and brilliance.

“If you don’t dream, you’ll never know. I used to go Heathrow airport and be one of the plane spotters.

“We started with two planes in Malaysia on September 8, 2001. Three days later, 9/11 happened. Running AirAsia has been rock ’n’ roll since then, with the Sars [severe acute respiratory syndrome] outbreak, the bird-flu epidemic, earthquakes, oil-price fluctuations and the Bali bombings. So we lowered the price and tripled our brand.

Consumers have become much more demanding. Standards will be counted. AirAsia wants to be more accountable, more transparent. We live in a fantastic period for the aviation industry in terms of growth,” Fernandes said.