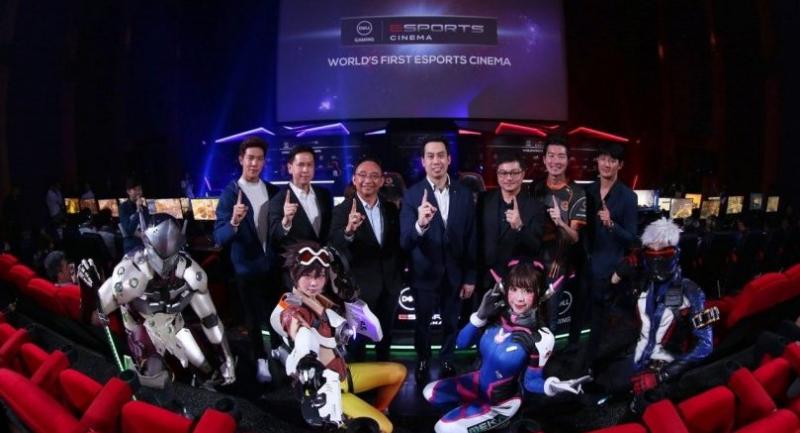 MAJOR CINEPLEX Group, the operator of multiplex theatres, yesterday expanded its cinema business with the launch of a new “e-sports theatre”, claimed to be the first in the world.

The cinema operator has converted the fourth movie theatre at Esplanade Cineplex Ratchada into the “Dell Gaming Esports Cinema”.
Narute Jiensnong, chief marketing officer of Major Cineplex Group, said the move is in line with the company’s strategy to cater to Thailand’s growing market for e-sports competition, which is estimated to grow 12 per cent annually to Bt10 billion in market value this year. There are about 2 million gamers in Thailand.
“The target customers of our e-sports theatre are a new generation, those aged between 12 and 35, same as those of moviegoers. We want to go beyond just ordinary theatres. The launch of an e-sports theatre will help Major Cineplex to expand its revenue as well as customer base,” he said.
Dell Corporation (Thailand), the world leading manufacturer of computer equipment for gamers, is to be the main sponsor for the new e-sports theatre. In addition, leaders in IT technology and computers like Intel, Neolution and True Online are also partnering the venture. This joint effort will ensure e-sports will be an official sport and will encourage gamers to utilise the e-sports theatre for practice sessions and later international stage competition.
Narute said that Major Cineplex Group was strongly entrenching its position as a leader in the lifestyle entertainment business, especially in an era when technology and digital gadgets are the prerequisites, making the cinema business more than just a theatre.
“As a leader in the lifestyle entertainment business, we are determined to incorporate the latest developments in innovation and technology to the cinema business, for Thai users to experience the impeccable entertainment service, especially in the tech and digital era,” said Narute.
The launching of the e-sports theatre is considered to be a significant leap in the cinema business and is expected to expand to more outlets.
In February, Major Cineplex Group initiated its business expansion into the gaming business for the first time by partnering with Imax, the world leader in screening technology. It opened the first Imax VR in Southeast Asia at Paragon Cineplex, considered as the first to offer a hands-on experience in virtual reality and it has received a huge response from Thais and foreigners, drawing up to 300 people per day, Narute said.
With governmental support, the registration of e-sports as an official sport has been approved and it is likely to be included as a new sport in the Asian Games and the Olympics in the near future.
Dell Gaming Esports Cinema will be a mixed-use theatre, designed to fit screening as well as e-sport activities. With a 4K screen, 14.6 x 6.1 metres in size equal to a 622-inch TV screen, Dolby Surround Sound System 7.1, and stadium-style seating, it can host up to a maximum of 60 contestants with 200 in the audience. The optimum quality of visual and sound system is expected to enhance the experience.
The service fee for the e-sport theatre comes in two types: an all-day pass for Bt200,000 and a half-day pass for Bt100,000, with time options of 10am to 3pm or 5pm to 10pm. The fee is inclusive of equipment and Internet usage.
Anothai Wettayakorn, vice president of Dell EMC Indochina, said that Dell Gaming and Alienware was delighted to join Major Cineplex Group in opening the Dell Gaming Esports Cinema. The venue will become a centre of e-sport service to support massive gamers as well as interested peers in computer games.
Dell Gaming Esports Cinema, offers multiple gaming equipment in various models, from Dell Gaming and Alienware, to ensure an exciting experience for users of Laptop Dell G7 Gaming, Desktop Alienware Aurora (R7), Dell 24 Gaming Monitor Screen (S2417DG) and others.
Sontiya Nujeenseng, president of distribution of CCG Platform in Asia Pacific and Japan, Intel Technology Asia Pte Ltd, said that Intel truly valued the potential of the e-sports market and gaming in Thailand. Therefore, the investment in the support of e-sport and gaming competition in international leagues has long been planned, as well as the creation of a partnership ecosystem to facilitate collaboration with partners and the continuous development in technology to deliver advanced gaming experience for gamers.