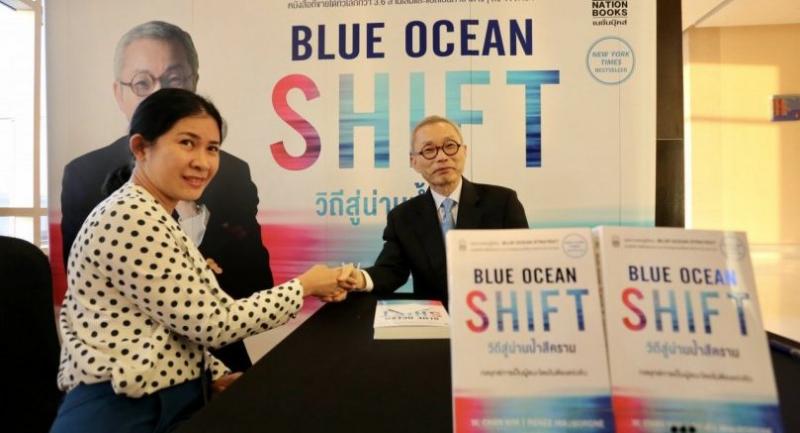 Kim, who is also co-author of the 2017 book “Blue Ocean Shift”, said at last week’s Krungsri Business Forum in Bangkok that the global output of goods will continue rising in coming years. This, he said, would result in an oversupply in most industries and much fiercer competition, a phenomenon known as a “red ocean”.

As a result, Thai business executives and other stakeholders need to create more blue oceans through value innovation. Speaking on the topic of “Blue Ocean Shift: New Approaches in Digital Economy”, he said the trial-and-error type of entrepreneurship is in need of an innovative change through a strategic framework like the “Blue Ocean Shift” process.

Kim cited the Apple-versus-Sony case, in which the former managed to become the world’s most valuable company, worth US$1 trillion (Bt32.8 trillion), through unrelenting innovation and a focus on profitability, while the latter lags behind.

He believes there are money-making opportunities everywhere and there should be no excuse regardless of the nature of the industry, when it comes to cashing in on the power of creative thinking and making a systematic shift towards the blue ocean. Competition is low or even non-existent in a blue ocean, at least at the start of a product or services’ life cycle, he said.

In their book “Blue Ocean Strategy”, Kim and co-author Renee Mauborgne advised businesses to get out of red-ocean industries and focus on creating fresh demand rather than competing with existing businesses.

In his Bangkok presentation, Kim argued that creativity is not random and there are patterns that can be adapted in a systematic manner, especially in the non-disruptive creation of new products and services.

Micro-financial services are one example, while another is the Air Fryer machines that use much less oil and have other significant benefits, such as healthier and tastier fried food, which gave the inventor a monopoly for the first several years of the product.

In fact, the blue ocean process is continuous – from being pioneers and migrants to settlers and so on – with a focus on creating new high-value products and services at a low-cost for maximum profits, as exemplified by Apple’s products, from the iPod and iPhone to iPad and Apple Watch.

According to the professor, the advent of smart machines and digital technology have ushered in a new era of abundant traditional products and services at low prices, whereas global demand is likely to shrink due to ageing populations in developed markets and other demographic factors.

As a result, there is urgency to create more blue-ocean industries, so his book aims to help business and industry executives achieve a higher rate of success in shifting towards blue oceans.

First, enterprises are advised to think “across industries”. Banks, for instance, have to imagine doing business in other sectors and vice versa.

Another example is Japanese gaming giant Nintendo, which has successfully tapped the grandparent market for gaming, even though senior citizens have never before been its customers.

The success stems from grandparents’ desire to connect with their grandchildren and vice versa via electronic games such as online golf or tennis.

In a systematic approach to find these blue oceans, the book specifies criteria, parameters and scientific tools to help users analyse new ideas and projects in pursuit of the new markets.

Kim said the tools are objective and scalable, with emphasis on “humanness”, because they help remove personal and other biases in the process of finding the right blue ocean in an efficient manner. Meanwhile, Dr Santitarn Sathirathai, group chief economist of SEA Limited, parent company of Garina and e-commerce site Shopee, said at the seminar that many boundaries are fading in the Thai and global context.

First, the boundary between desktop and mobile computers has been fading fast as mobile phones and other devices begin to outnumber citizens.

Second, the line between social commerce and e-commerce has blurred due to the rise of Facebook, Instagram and Line, because these social-media platforms are fast becoming commercial platforms.

Third, the boundary between consumers and producers is fading due to the popularity and emergence of consumer-to-consumer (C-to-C) and consumer-to-business (C-to-B) online commerce platforms.

Other fading boundaries include those between investment and expense, data and assets, the disruptor and disrupted, students and teachers, and workplace and university.