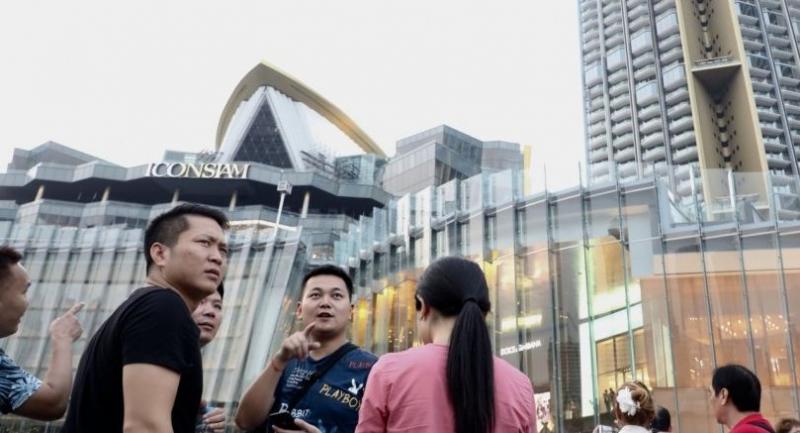 THE GOVERNMENT and the private sector are launching joint campaigns to bring back Chinese tourists during the peak festive season and hope that this will help Thailand reach this year’s tourism targets.

A rare drop in tourist arrivals in October, caused by a sharp fall in the number of Chinese visitors, has cast a shadow over the country’s economic outlook.

“Overall arrivals in October totalled 2.7 million, down 0.5 percentage point from the previous year, due to a sharp drop in Chinese tourists,” permanent secretary for Tourism and Sport Ministry, Pongpanu Svetarundra, told a news briefing on November 21.

Since the Phuket boat tragedy in July, the number of Chinese tourists to Thailand dropped by 12 per cent in August, 15 per cent in September and nearly 20 per cent in October.

Around 646,000 Chinese tourists visited the Kingdom last month, registering a drop of 19.8 percentage points year on year. Tourism revenue from the Chinese market fell by 16.5 per cent to Bt34.6 billion.

However, he said, more than 37 million tourists had visited Thailand over the past 10 months, rising 7.8 per cent from the same period last year. Tourism revenue hit Bt1.6 trillion, up 9.9 per cent.

“But the numbers are still below target. We need to meet our target of Bt370-billion revenue in the last two months of this year, which would be a miracle. However, I don’t think we will miss our annual target of Bt2 trillion,” Panupong said.

The Tourism Council of Thailand (TCT) echoed his sentiments.

“The Chinese market got slightly better, but still has not recovered. The fall in the number of Chinese tourist arrivals is primarily due to a loss of confidence and the weakening of the Chinese currency and their purchasing power as a result of the [US-China] trade war,” Chairat Triratanajarasporn, newly appointed president of TCT, told The Nation.

So, in an effort to give tourism a boost, the government and private sectors have joined hands to woo tourists with various campaigns.

“With the E-VOA and Amazing Thailand Grand Sales: Passport Privilege campaigns, we hope to target Chinese tour groups who are sensitive to the weakening yuan,” Tourism and Sport Minister Weerasak Kosurat told The Nation.

He added that the government has taken the highest security measures for the just-salvaged “Phoenix” boat, which sank off Phuket province in July, taking with it the lives of 47 Chinese tourists in order to regain the confidence of Chinese tourists.

“The short-term drop of Chinese tourists hopefully ended by October. The number of tourists visiting Thailand over the past 10 months still showed a 10 per cent rise and revenue during that period was 12 per cent higher,” Weerasak revealed.

“The Europeans were the biggest spenders, with higher revenue of over 30 per cent. Canadians and Russians were also big spenders, creating an increase in revenue of 22 per cent and 20 per cent respectively,” Weerasak added.

“We hope the rise in non-Chinese tourists will help us reach our target.”

The Riverside mega-mall Iconsiam aims to draw 150,000 tourists per day, while many Chinese tourists have also checked out Bangkok’s newest tourist attraction, the Mahanakhon Skywalk.

“We hope Chinese tourists who love eating and shopping will spend more money while staying here. In January, the private and government sectors will jointly host a free dinner for 10,000 Chinese tourists in Bangkok by serving 5 tonnes of sticky rice with 500 mangoes. This will be recorded in the Guinness Book of World Records,” Chairat said.

“We will also work to expand tourism to second-tier provinces. However, long-term security, fair pricing and good hospitality will bring back sustainable tourism to Thailand,” he concluded.