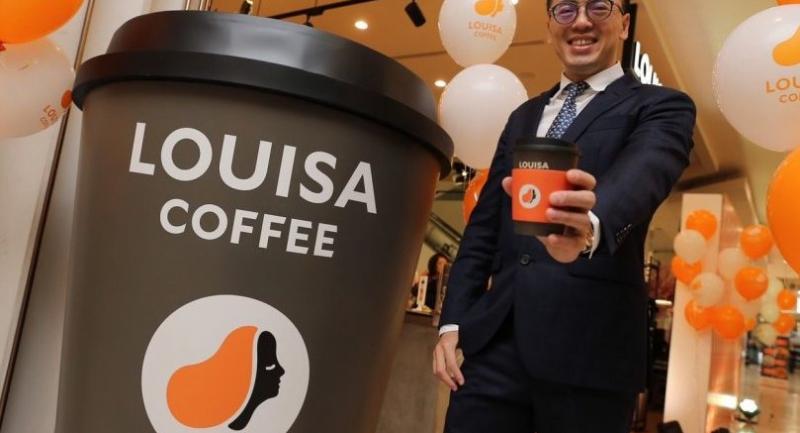 Chris Huang, founder and general manager of Louisa Coffee in Taiwan, expresses his confidence on the outlook for the cafe chain at a media briefing yesterday to announce the expansion into Thailand.

LOUISA Coffee, a Taipei-based leading premium coffee-house chain with more than 450 branches in Taiwan, yesterday officially opened its first outlet in Thailand at the Amarin Plaza complex in Bangkok.

“We aim to open a total of five Louisa Coffee outlets [in Thailand] in the next three years, as coffee culture in Thailand has been booming in recent years,” he said.

Thailand is considered to have a high growth potential, and both local and foreign cafe chains continue to bloom across the country. The value of the cafe sector alone reached Bt21.22 billion in 2017, and up to Bt23.47 billion last year. The industry is expected to reach Bt25.86 billion in value for this year, according to the Food Intelligence Centre, Thailand.

Thai Coffee Association/Asean Coffee Federation calculated different figures, that put the cafe industry in Thailand at Bt17 billion, of which Bt9 billion is from the general coffee-house segment, and another Bt8 billion represents premium coffee houses.

“Thai people consume an average of between 0.5 and 1.0 kilogram per person per year, while Americans and Scandinavians consume 3.5 kilograms and 10 kilograms of coffee respectively per annum,” said Huang. “Furthermore, coffee consumption is expected to grow at least three-fold to more than 300,000 tonnes per year,” he noted.

“According to the statistics [drilling down] on the population of coffee drinker, Europeans drink an average of 1,000 cups of coffee every year. Meanwhile, the United States, Canada and South Korea are at 500 cups a year on average, with about 4-5 cups for China. For Thailand and Taiwan, consumers drink almost 100 cups of coffee annually.

“We expect Taiwan and Thailand markets will double the growth of coffee consumption in the future,” said Huang. In the meantime, he said the company not only projects the coffee-market potential, but also provides a new-style space for the marketplace. For example, the first Amarin store in Thailand will be set up for customers to experience a coffee journey.

Louisa Coffee was founded in 2006 in Taipei, the capital of Taiwan. Stemming from the founder’s passion in coffee, the coffee-house chain has established itself as experts in quality coffees.

“We spent more than a decade crafting the best coffee, from roasting the beans, controlling the temperature to brewing each cup,” he said.

“Louisa Coffee operates over 450 coffee houses across Taiwan at the moment, and will expand to more than 550 stores by the end of this year. Louisa Coffee has officially beaten Starbucks and become the No 1 largest coffee-house chain and the most popular brand in the Taiwanese market,” said Huang.

“Our expansion strategy is to open over 100 stores every year, both in Taiwan and in potential markets abroad. Louisa Coffee has been true to the traditional coffee culture process, using scientific production to ensure every cup of coffee is of the same excellent quality,” he said. In addition to Thailand, Indonesia is seen as a potential market for expansion within Asean region.

“We will deliver the same system from Taiwan to the Thailand market,” said Huang.