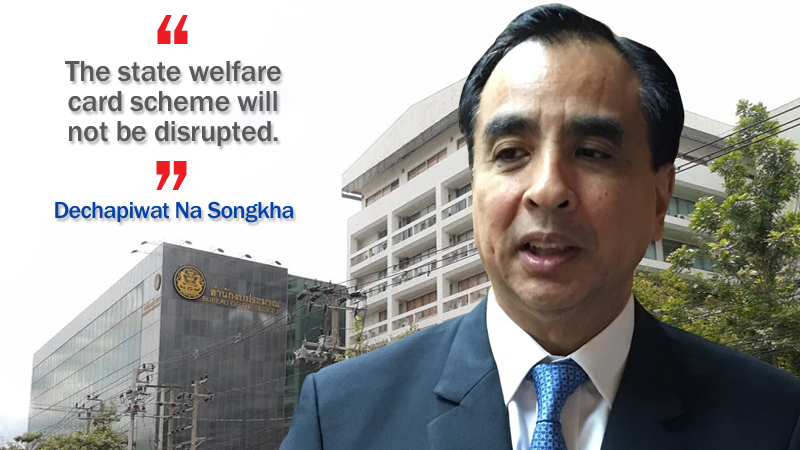 The delayed budget will not affect public investment and the state welfare card scheme because the new government will have a Bt1.2-trillion bridging fund to spend, said Dechapiwat na Songkhla, director of Budget Bureau Office.

The lag in forming a new coalition government has led to a delay in the scheduled October start date for the 2020 budget.

“The new annual budget for the next fiscal year is expected to come into force in early January next year, a three-month delay,” said Dechapiwat.

Prime Minister General Prayut Chan-o-cha has struggled to form a Cabinet since the general election in March but vowed the new ministers would be sworn in by the middle of this month.

Economists and businesses have expressed concern that delayed budget disbursement could deepen the slowdown in an economy already impacted by contraction of exports.

The government can also meet its obligations on public investment. The total expenditure for salaries of state officials, other fixed items and capital spending in the period from October to December 2019 is estimated at Bt1.2 trillion, he said.

“The welfare card project would not be disrupted,” he added.

Regarding the fiscal 2019 budget due for completion at the end of September, so far capital spending had reached only Bt400 billion of the total planned Bt650 billion, Dechapiwat said. The Budget Bureau Office had ordered state agencies to sign pending contracts with private firms by the end of September, he added.

“The Office is targeting 100 per cent disbursement of the Bt3 trillion under the current fiscal 2019 budget. Full spending would boost the economy during the delay in government formation,” he said.

The junta-backed government set expenditure for fiscal 2020 at Bt3.2 trillion, up 6.7 per cent, with an estimated budget deficit of Bt450 billion. The incoming government, however, will review the spending plan as the coalition administration is composed of political parties with differing policy priorities. The new Cabinet is scheduled to take office by middle of this month, when ministers will start forming spending plans with the Budget Bureau. The Bureau will then submit the budget framework to the Cabinet for approval in August, before organising a public hearing on the draft budget and then re-submitting the draft budget to the Cabinet for approval.

The draft will be forwarded to Parliament in early October, for up to 105 days of deliberation by the lower house flowed by up to 20 days in the Senate. It will will then be submitted for royal endorsement and is expected to come into force in early January next year, Dechapiwat said.