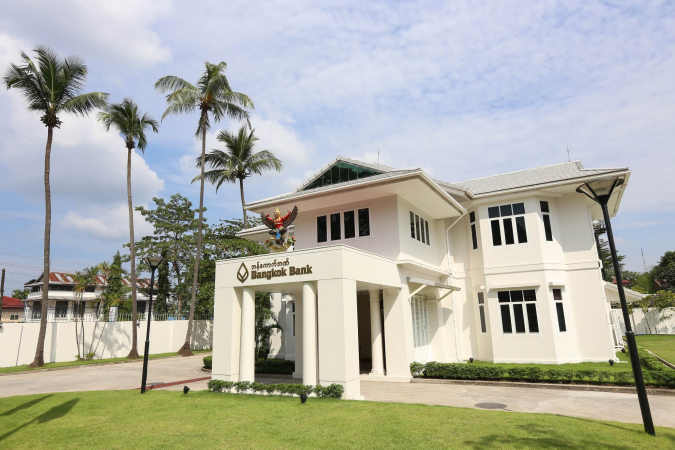 The Yangon branch of Bangkok Bank, the only Thai bank to be awarded a foreign banking licence in Myanmar. It is in the Yankin Township of the country’s business capital. (Photo courtesy of Thaipublica.org)

He told The Nation on Wednesday that the third round of issuances of licences for foreign banks would be opened by the end of this year.

On Tuesday, the CBM’s foreign banks selection committee met to approve 15 criteria for the selection of an eligible consulting firm to provide advisory services for the process of awarding licences to foreign banks that already have a representative office in Myanmar.

“In late May, we invited a total of eight consultancy services to submit proposals for providing advice on the selection of foreign banks. Half of them submitted RFP [request for proposal] on June 24,” he said.

The deputy governor said the CBM is reviewing the applications to score each of the firms depending on the selection criteria, which include consultancy fees, payment terms, professional background, experience and the academic qualifications of team members.

“The majority of the criteria largely depend on the quality and capability of the consulting firms. We will systematically assess how they’ve formed their teams and how they support us in this selection process,” he said.

“This is the very first stage of the next round of foreign banks licences that we expect to open later this year. We will choose the eligible consulting firm in the next meeting of the foreign banks selection committee, which is expected in the last week of July.”

Myanmar has yet to decide how many foreign banks will be awarded the licences in the next round, the official said.

“First, we [CBM officials] need to discuss with the selected consultancy firm. Later on, we will finalise the details,” he said.

Soe Thein said Myanmar has relaxed restrictions on the licensed foreign banks to some extent. Last November, the CBM allowed the banks to provide import financing and other banking services to local businesses.

“They can provide loans to local enterprises with the same value as local banks,” he said.

“When it comes to providing credits in local currency, we apply the same conditions for both local and foreign banks. It means we ensure there is no discrimination.”

To date, Bangkok Bank is the only Thai bank that has been awarded a foreign banking licence in Myanmar. Having operated in Myanmar for more than two decades, the bank was granted the licence in 2014 and opened its Yangon branch in June 2015.

Four other Thai banks - Siam Commercial (SCB), Krung Thai, Kasikornbank and Export-Import Bank of Thailand, along with BOT Lease (Thailand) Co - are among the 53 foreign banks and finance companies that have a representative office in the country.

Three other Thai banks are likely to apply for the licence when the next round opens, while EXIM Thailand has not yet shown interest.

“In the second round, the selection committee decided to give preference to banks from the countries which were not selected in the first bidding,” said Soe Thein.

“It is still too early to finalise the conditions for the third round but there may be a chance for the banks that are well-prepared,” he added.

Pisit Serewiwattana, the president of EXIM Thailand, said in an earlier interview with The Nation that the bank prefers supporting state-owned banks that are vying for a foreign banking licence rather than establishing a branch in Myanmar.

Kamalkant Agarwal, first executive vice president at SCB, told The Nation earlier that the bank would again apply for the licence in the next round.

“Regarding the licence, we remain hopeful and will definitely keep trying … It is up to the central bank. On our side, we are very keen and whenever there is a new round, we will definitely apply for it,” he said.