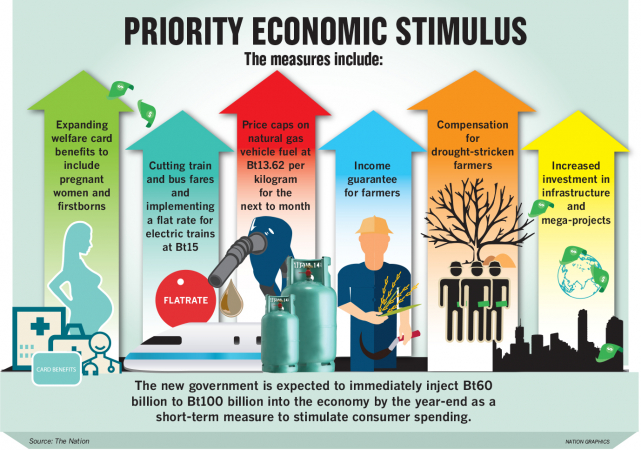 The new government is expected to inject between Bt60 billion and Bt100 billion into the economy by the end of the year with policies to boost consumer spending and reduce the cost of living.

However, economists question the government’s budget capabilities to fund these projects and suggest that it should prioritise policies that directly boost consumer spending.

The economy is this year projected to grow at a mere 3.1 per cent, the Bank of Thailand said earlier this month, compared to the 4.1 per cent growth witnessed in 2018, .

The key factor dragging down growth has been declining exports, which makes up for more than 75 per cent of the Kingdom’s GDP.

With the new government established, the ministers have announced their immediate economic policies to stimulate growth in the second half of 2019.

First, Finance Minister Uttama Savanayana said that he plans to expand the benefits offered under the welfare card scheme for low-income earners. He also announced that state welfare will also cover pregnant women and firstborns.

Uttama said that in the long term, the government will reform the tax structure in order to address the issue of income inequality in the country.

Mana Nimitvanich, first vice president of the Krungthai Bank’s global business development and strategy group, said: “Through the welfare card policies, the incoming government should be injecting at least Bt4 billion per month into the economy.”

This amounts to around Bt20 billion injection in total by the end of the year from this measure alone.

Transport Minister Saksayam Chidchob stated earlier this week that the government has plans to cut train and bus fares, as well as to propose a flat rate for electric trains at Bt15 for all rides.

This, he said, will be part of the government’s efforts to reduce the cost of living by lowering transport costs.

“The farmers’ revenue guarantee programme has been one of the most successful campaigns of the previous government and is therefore expected to continue following the existing procedures and regulations which have proved to be working,” he said.

Phacharaphot Nuntramas, senior vice-president for global business development and strategy at Krungthai Macro Research, said: “We also expect the incoming government to relieve the drought problem by providing compensation for farmers who have fallen victim to this year’s dry season.”

He estimated that in the past three months the lost income resulting from the drought amounts to Bt10 billion.

Despite all these policy promises, economists and private-sector representatives are questioning whether the government will have sufficient funds in the budget to finance these economic measures.

The policies promised by the new government suggest that around Bt100 billion will be injected into the economy by the year’s end, said Mana. However, it may be difficult for the stimulus injection to reach this value, given the budgetary issues which the government is facing.

Mana, along with other economists throughout the country, have predicted that the level of public spending and investment will fall off in the fourth quarter of this year as the fiscal budget for 2020 will be delayed by two to three months due to the slow formation of the government.

Even so, Mana said, the government should be able to inject at least Bt60 billion into the economy by the year-end from the current budget.

“Ideally, the government should be spending around Bt100 billion to boost economic growth in the second half of this year. However, it is unclear how the government will fund their policy promises given their budget issues,” said Kriengkrai Thiennukul, vice chairman of the Federation of Thai Industries.

Phacharaphot said: “We expect the incoming government to focus on policies which directly target consumer spending, such as increasing the benefits of the welfare cards and providing compensation for drought-stricken farmers.”

Tim Leelahaphan, an economist at Standard Chartered Bank, said that expanding welfare card benefits is the most likely measure which the incoming government will implement in order to promote consumer spending and stimulate the economy in the second half of this year.

Tim stated that if these policies are implemented effectively, it could cushion the slowdown of the economy, stimulate economic growth in the second half of this year and prevent GDP growth from falling below 3 per cent in 2019.