The depreciation of the Chinese yuan will affect the baht and Thailand’s export values for the rest of the year, which will force the Bank of Thailand to come up with measures to manage the currency, economists say.

“The baht will fluctuate and even depreciate when foreign investors take their money out in response to the Bank of Thailand’s move to bring down the balance in non-resident accounts from Bt300 million to Bt200 million per person. However, the currency should appreciate again as Thailand is a safe haven for investors due to its high-foreign currency reserve and a public debt that is only 40 per cent of the gross domestic product,” Dr Somchai Pakapaswiwat, an economist and independent academic, told The Nation on Tuesday.

However, he said, when the baht appreciates against the US dollar, it will also rise against the Chinese yuan, which will have a direct impact on Thai exports, because Chinese products will become cheaper.

“China may also dump its products in the Thai market, especially if Chinese goods work out to be cheaper than local products,” Somchai said.

He added that since the trade war has now become a currency war, it will have an adverse effect on all countries, which is why the South Korean won has also dropped against the greenback.

Somchai believes the central bank may launch other measures to manage the baht, especially since it is appreciating over currencies from countries that are direct export competitors.

Research by the Siam Commercial Bank’s Economic Intelligence Centre shows that the baht has risen 5.1 per cent against the dollar since January 1, while the yuan has dropped 2.3 per cent.

“Recent events in the US-China trade war will definitely have negative ramifications on Thai exports,” said Supant Mongkolsuthree, chairman of the Federation of Thai Industries.

He added that labelling China as a currency manipulator may lead to a further escalation in the ongoing trade war and set off risks such as the tariff impact spilling over to Thailand, a slowdown in the global economy and currency volatility.

Currently, most Thai exporters use the US dollar as the currency for cross-border trading, Supant said. Hence, he said, to reduce risks induced from volatile currencies, we must promote the use of local currencies in cross-border trade. 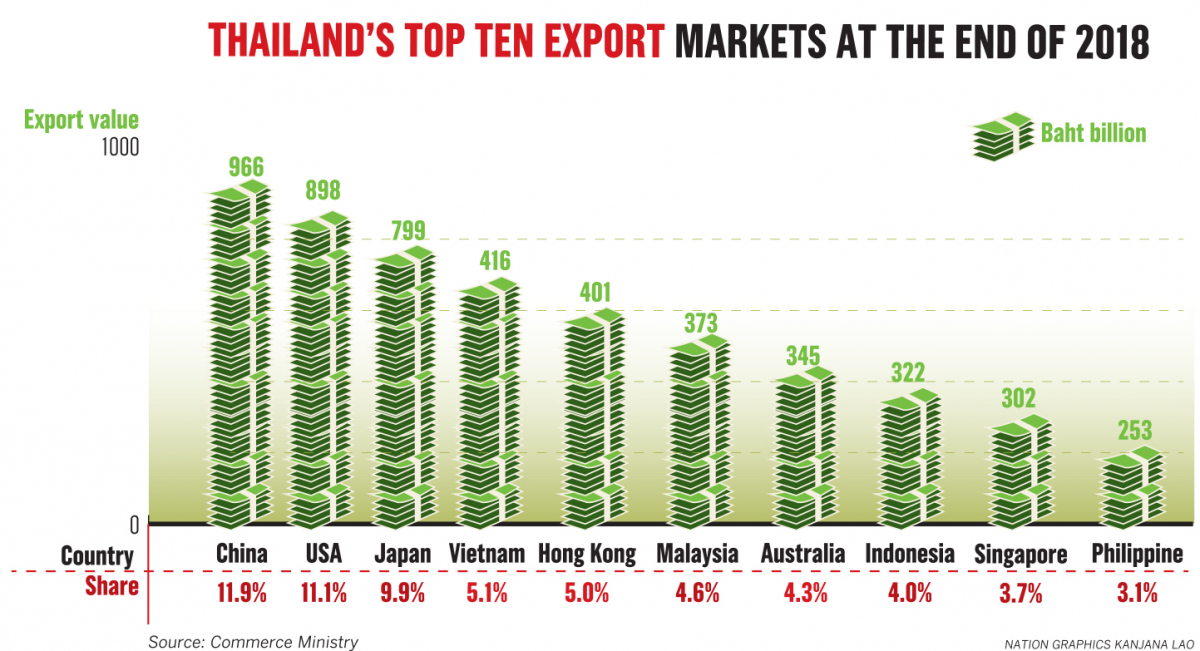 Recent tensions between the US and China will likely contribute to a hardening of positions from both sides, said Martin Petch, vice president of Moody’s Sovereign Risk Group.

“It also increases the likelihood of US tariffs on Chinese products to rise beyond current levels, followed by further retaliatory measures by China,” he continued. “Unless negotiations between the US and China resume rapidly, this latest development is likely to create negative spill-over effects in both China, the US and globally, and particularly in Asia.”

Furthermore, he cautioned, market expectations of further yuan devaluation may force other currencies to drop, particularly those with strong trading ties to China.

Meanwhile, the Thai National Shipping Council’s chairman Ghanyapad Tantipipatpong said the private sector was worried about the yuan depreciation, but had yet to evaluate its impacts on Thai exports.

She added that preliminary estimates show that a weaker yuan will increase the price of goods exported from Thailand by 10 per cent.

She added that the council will monitor the export market in the last quarter to see if the yuan depreciation has had any impact.

Ghanyapad also said the council wants related state agencies to stop the baht from getting any stronger, because if the baht appreciates beyond the Bt30 to a US dollar mark, it will have an adverse impact in the export market.

The council has also drawn up a strategy for the government, and one of its recommendations is for the Commerce Ministry to set up a war room to closely monitor the export situation and enhance the sector.

Moreover, the ministry should look for new promising export markets and hold off on increasing the daily minimum wage.