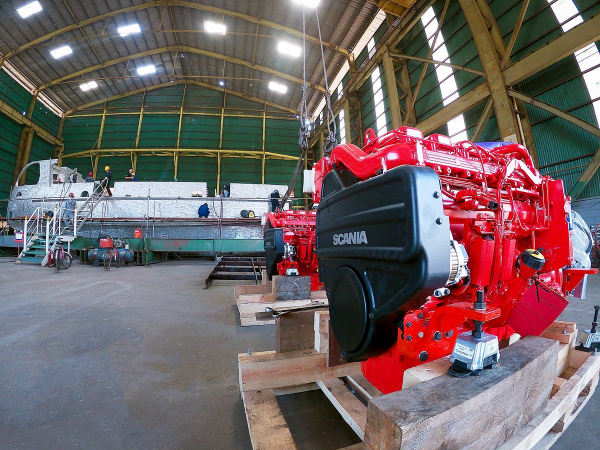 Scania Siam and EA Mechanics aim to boost their growth in the marine engine market in Thailand, targeting a doubling in sales expansion in 2020.

Sathit Riyatanon, director of after sales services at Scania Siam, said: “Scania has been marketing the marine engine for about two years since 2017, with EA Mechanics becoming an official distributor. We work with ship structure manufacturers to penetrate the boat engine market, so we will sell and service only the Scania marine engine.”

Sathit said that the marine engine market in Thailand is growing rapidly and that costumers know the importance of a good engine.

“A wooden boat that transported passengers and tourists on the Chao Phraya River Before was converted into an all-aluminium vessel, because of the problems in maintenance.

“Certainly, the engine is the heart of the boat. For the Scania marine engine market, the market is classified into three main groups. These consisting of the Chao Phraya Express boat, which provides pick-up and drop-off services on important locations on the Chao Phraya River, towing boats such as sand boats and other boats that Scania will continue to market. By 2020, it is expected that 32 Scania engines will be sold.

"It is not difficult to select a Scania marine engine because we are famous, with outstanding features such as fuel saving and environmentally friendliness.

“The oil change cycle at each cycle is 500 hours apart and the engine is durable. We have expertise and agents like EA Mechanics have received training according to the Scania standards.”