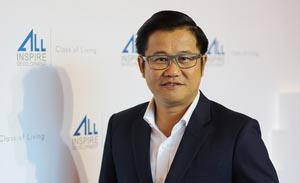 ALL Inspire Development PCL has outlined its strategy for the second half of this year to develop new low-rise and high-rise condominium and townhome projects worth Bt12.5 billion, putting more emphasis on targeting real demand.

Thanakorn Thanawarith, the chief executive at ALL, said that the firm is confident it will achieve Bt4.5 billion in total 2019 revenue, the company’s highest record. It now has a backlog of Bt8 billion after announcing a strong first-half performance. ALL made Bt1.692 billion in total revenue for the first half of this year, a 49 per cent rise from the same period of last year, as well as net profit of Bt213 million, up 29 per cent year-on-year. For the second quarter, its total revenue was Bt840 million, a 49-per-cent growth year-on-year in all aspects.

An overseas sales team comprising four nationalities will be introduced under Thai D Real Estate Co Ltd and is expected to expand the portfolio of foreign customers.

Thanakorn said performance in the second quarter saw ALL record total revenue of Bt840 million, growing 49 per cent year-on-year, with net profit of Bt116 million, up 44 per cent. Contributing to the strong performance was the efficiency of management, which paid attention on developing condominium projects along the mass-transit system and in potential locations to reach real customer demand. This makes all projects to truly serve customer needs in all aspects, according to a Wednesday release from the firm.

Meanwhile, the success in the first half is supporting the company’s decision to expand its investment in the second half of this year. ALL plans to launch new projects worth Bt12.5 billion ranging from low-rise to high-rise condominiums and townhome projects. It will introduce The Vision Ladprao–Nawamin Phase II on August 31.

The Excel Ladprao-Sutthisarn project, which was launched in early August, received overwhelming response, with the pre-sale of Bt850 million in one day, 70 per cent of the project’s total sales of Bt1.2 billion. This big success was proof that the new projects to be launched in the coming months will also get positive feedbacks from customers, according to the release.

“We have 3 newly-built residential projects worth a combined Bt5 billion, including The Vision Ladprao–Nawamin, which is valued  at Bt1.4 billion, the Impression Phuket worth Bt2 billion and The Excel Hideaway Sukhumvit 71 valued at Bt1.6 billion,” said Thanakorn.

With all these new project plans, the company is confident that its full-year revenue in 2019 will exceed Bt4.5 billion. It has a backlog of Bt8 billion as of June 30, 2019, which will be realised in the next 3-4 years. Of the total, Bt5.52 billion will come from low-rise condominiums, Bt2.24 billion from high-rise condominiums and Bt240 million from townhome projects. Currently, the company has an inventory of completed units worth Bt201 million from The Excel Khukhot and Rise Rama 9 projects.

Moreover, the CEO noted the company has plans to diversify its business overseas in order to increase the proportion of foreign customers. The company today (August 28) introduced its overseas marketing and sales team, which will be under Thai D Real Estate Co Ltd, the property broker for foreign markets. The launch of an overseas sales team comprising four nationalities is a new milestone for ALL to expand its business through sales offices in Shanghai and Taipei, two Chinese metropolitans with large populations. This will allow ALL to penetrate the Chinese customer market significantly in the future, said the CEO.

Together with this, Thanakorn revealed the company’s investment in the lease rights of The New Forum Plaza in Chon Buri province, with a gross building area of 34,952 square metres, and a gross leasable area of 11,593 sq m. The lease will be 29 years and valued at Bt600 million.

This investment represents a business expansion from residential properties to shopping malls. The project launched construction activities in July 2019 and is expected to finish in the middle of next year and open for commercial services in the second half of 2020. ALL expects to generate monthly income above Bt10 million during the first stage. When the project has full service in 2021, the income will reach Bt200 million per year. This will result in the revenue from this business contributing Bt5.8 billion for the whole lease period, of which 90 per cent of revenue will come from rents and 10 per cent from the other sources.