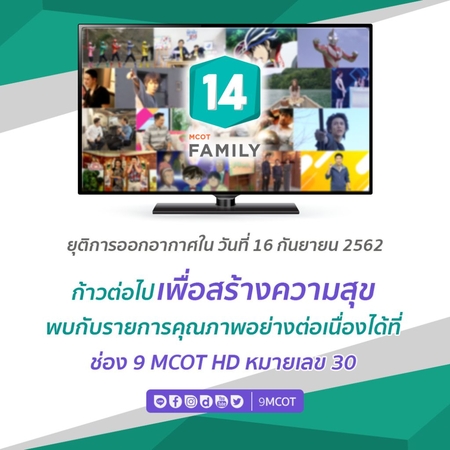 MCOT will not lay off staff working for its Family Channel 14 digital TV channel, which will be switched off at midnight on September 15, but will relocate them to other business units as appropriate, MCOT president Kematat Paladesh said.

He added that most of the programme content partnership contracts between MCOT's Family Channel 14 and its partners had already expired on June 30 this year.

After the closure of the Family channel, MCOT would still run one channel, the high-definition Channel 30.

In May this year, six broadcasters informed the National Broadcasting and Telecommunications Commission (NBTC) of their intention to hand back the seven licences they had secured from the NBTC. May 10 was the deadline for broadcasters to declare their intention.

BEC Channel 28 and Channel 13 leave the airwaves at midnight on September 30.

All these channels get compensation from the NBTC after they are shut down.

After their exits, there will be 15 channels left in the crowded market.

The NBTC awarded 24 commercial digital TV licences via auction in December 2013, raising around Bt50.862 billion in bid payments. Their 15-year licences were good from April 25, 2014. However, the broadcasters found it difficult to survive due to unfavourable market conditions, coupled with brutal competition from formidable online media channels.