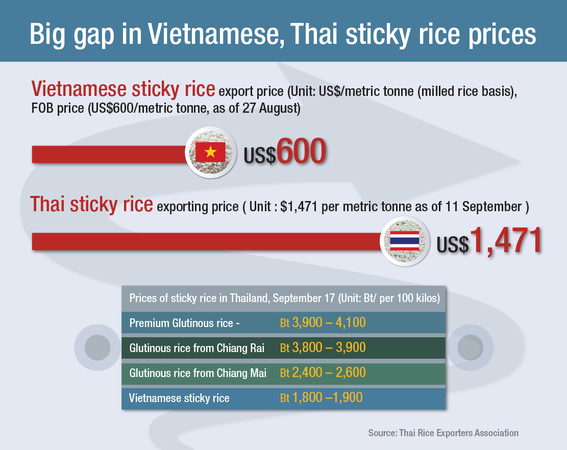 Sticky rice have been  smuggled into the country, but ironically it has helped curb soaring price, said Chukiat Opaswong, honorary president of the Thai Rice Exporters Association.

Some merchants, he said, had smuggled 100,000 tonnes of glutinous rice into the country  from Vietnam via Thailand’s neighboring countries, adding that they were then mixed with Thai glutinous rice before going on sale in the local market.

Some merchants have been  arrested and charged for their wrong-doing, with some smuggled batches weighing up 30 tonnes each.

The quality of Vietnamese sticky rice is lower than their Thai counterpart as it tends to turn crumbly, not sticky, when cooked.  However, their quality improve when mixed with Thai produce.

If consumers feel the quality of glutinous rice is not good enough,  they can assume that they were smuggled in from Vietnam, Chukiat said.

However, Chukiat said  it is widely believed that the  price of sticky rice would have risen to Bt 60-70 per kilogram if not for the smuggling.

Recently, the price fell to Bt 40-41/ kilogram with the launch of packaged bags, targeting  low-income people.  Also, merchants have refrained from price speculation due to strict stock checking and the fact that  the new harvest of glutinous rice will enter the market next month.

Wichai Phochitkit, director-general of Internal Trade Department said  the new supply will soon be released into the market, adding that the department will set the appropriate price as it has a direct impact on farmers' income.

It is reported that Thong Fah shops and the local communities have pushed the Ministry of Commerce for  further releases of  glutinous rice bags through the Department of Internal Trade.

The ministry has been releasing glutinous rice stock since 11 September. However, it has yet to reach   consumers  in many parts of the country while supply to Thong Fah stores will be delivered  this week.