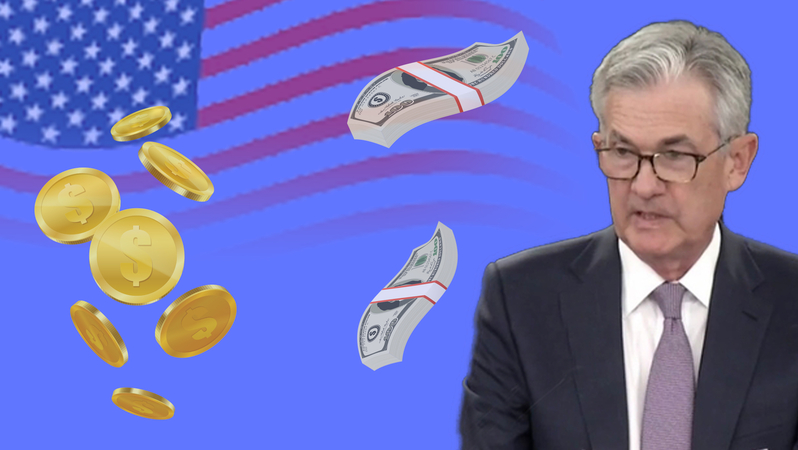 The Federal Reserve made a modest reduction in interest rates Wednesday in an effort to keep the U.S. economy strong, a measured approach that stopped far short of the dramatic action President Trump has demanded for months.

“Jay Powell and the Federal Reserve Fail Again,” Trump wrote on Twitter, berating the Fed chair he handpicked. “No ‘guts,’ no sense, no vision! A terrible communicator.”

The Fed’s decision to lower its benchmark interest rate just shy of 2 percent, down from about 2.25 percent, brought into sharp contrast the competing views of the economy that are emanating from the White House and the central bank less than 14 months before the 2020 election.

While Trump has insisted that most problems with the economy are squarely the Fed’s fault, Powell on Wednesday said trade uncertainty was a key factor weighing on growth. Powell didn’t single out Trump for causing the trade uncertainty, but many business executives and lawmakers have.

“Trade developments have been up and down and then up, I guess, or back up, perhaps over the course of this intervening period. In any case, they’ve been quite volatile,” Powell said at a news conference following the announcement of the new rate. “We do see those risks as actually more heightened now.”

Stocks initially fell sharply after the Fed news as investors thought the central bank was signaling it would not cut again this year, but stocks rebounded amid speculation that the Fed might change course. The Dow Jones industrial average ended the day up 36 points.

“History teaches us it’s better to be proactive in adjusting policy if you can,” Powell said. “The idea that if you see trouble approaching on the horizon, you steer away from it if you can."

The small, quarter-point reduction was meant to address fears about slowing growth in Europe and parts of Asia, as well as concerns that Trump’s trade war with countries around the world would remain a drag on growth well into the future. The Fed said it would “act as appropriate” to keep the economy growing. But a majority of the Fed’s voting members signaled they don’t expect to lower interest rates again before the end of the year.

The quarter-point reduction Wednesday was widely expected but stood in sharp contrast to the “big” cutTrump has recently advocated. Trump has called for lowering the benchmark rate to zero, or even pushing it negative as a way to lure investment to the United States.

Powell on Wednesday largely ruled out supporting negative interest rates and suggested he would lower rates further only if there was evidence the economy was slowing.

The Fed’s decision, which was not unanimous, comes at a pivotal time for the central bank, the economy and the White House. Fed officials are trying to help keep the economy growing without fanning inflation or squelching growth. The economy is sending mixed signals about whether it might slow markedly next year or continue chugging along. And a strong economy is key to Trump’s reelection effort in 2020. He has tried to frame the Fed as a primary culprit if there’s any slowdown.

For decades, White House officials had largely avoided commenting directly on the Fed’s monetary policy decisions, seeking to preserve the central bank’s independence and credibility. Trump has shattered that norm and even asked aides whether he could replace Powell, a person he picked for the job in late 2017. Powell on Wednesday wouldn’t respond to Trump’s latest criticism, saying instead that the central bank made its decisions “without regard to political considerations.”

Only seven of the 17 Fed leaders penciled in another rate cut this year, according to economic forecasts released Wednesday. The rest predict rates will stay where they are — or rise.

The Fed painted a mostly upbeat picture of the economy, saying the job market remains “strong” and consumer spending is “rising at a strong pace.” The Fed predicts the economy will grow 2.2 percent this year, weaker than the roughly 3 percent target that White House officials have cited. The economy grew 2.9 percent in 2018.

“The Fed wants to stop the economy from slipping into a recession, but Fed leaders aren’t going to do anything to push growth higher,” said Eric Winograd, senior economist at AllianceBernstein.

“Although household spending has been rising at a strong pace, business fixed investment and exports have weakened,” the Fed wrote in a statement.

The U.S. economy is in a tricky place, and Fed leaders remain divided over what to do. Consumers keep spending, but the U.S. manufacturing sector is struggling and business investment has collapsed as many companies fear Trump’s trade war won’t be resolved anytime soon. His standoff with China has been a particular concern. The president has repeatedly dialed up and then dialed back threats and penalties against China, one of the world’s largest economies, in the past year in an effort to force the country to make major changes to its economic relationship with the United States. Powell on Wednesday said trade risks are “more heightened now” following new tariffs against Chinese imports.

“We do feel trade uncertainty is having an effect,” Powell said. Officials “see it in weak business investment and weak exports.”

Trump has recently said he thinks he will reach a deal with China, but it might not come until after the 2020 elections. He has already imposed tariffs on more than $250 billion in Chinese imports and larger penalties are set to kick in next month and then even more in December.

Some economists have questioned whether the Fed should be reducing rates at all given how healthy the economic fundamentals look. Two out of the 10 members of the Fed’s committee that determines interest rates voted against the cut, preferring to leave rates unchanged. On the flip side, one member dissented against the latest decision because he felt the Fed should have cut rates by half a percentage point.

“Powell has the votes for a quarter-point cut, but he can’t commit to anything else,” said Diane Swonk, chief economist at Grant Thornton. “He can’t promise additional rate cuts, which will disappoint the market.”

Since the Fed’s last meeting, on July 31, Trump has tweeted or retweeted 43 times criticizing the central bank and calling for deeper rate cuts. He has called Powell a “bonehead” and “enemy” for not lowering rates faster.

On top of political pressures, the Fed faced an unusual situation this week where the interest rate on overnight loans to banks spiked above 8 percent, well above the Fed’s target and the highest level since the last financial crisis. Powell downplayed concerns about the situation and said the central bank would continue to pump a bit more money into the system to get the rate back down under 2 percent.