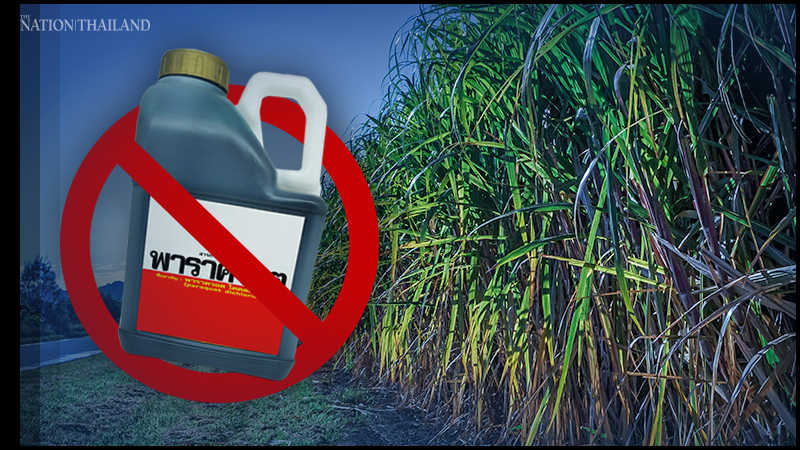 Millions of sugarcane farmers and some academics have voiced opposition to the ban on farm chemicals paraquat and glyphosate, saying the discontinuation of these substances can cost the sugar industry as much as Bt570 billion.

Thongkam Cheongklad, chairman of the Sugarcane Farmers Association, said if paraquat – a chemical used to control weeds – is prohibited, it will have a significant impact on the cost of production for farmers. It has also been reported that the substitution for paraquat is quite expensive and may not be as effective.

He said some 1.2 million people involved in the sugar industry in the Central, North, East and Northeast regions are opposed to the ban on the two chemicals.

Kitti Choonhawong, president of the Thailand Society of Sugarcane Technologists said sugarcane plantations cover about 11 million rai nationwide and generate as much as Bt300 billion annually. He added that the ban of the two chemicals may lower the production of sugar, which will have an impact on sugar factories and export, accounting for losses of as much as Bt570 billion.

He also said that the export market may lose as much as Bt94.6 billion, as Thailand is second only to Brazil as the world’s leading sugar exporter.

Viroj Na Ranong, research director at Thailand Development Research Institute, warned that if Thai sugar farmers are no longer allowed to use chemical pesticides and chemical fertilisers, the country will not be able to produce enough food for consumption.

However, he said, if chemical pesticides are banned but chemical fertilisers still allowed, then there may be enough food for domestic consumption, though the cost of production will rise as more labour will be required and the cost of labour is very high.

“The government has to implement measures based on research, not on social trends and politics,” he noted.

The National Hazardous Substances Committee is scheduled to meet on October 27 to decide on whether the use of three toxic farming chemicals -- paraquat, glyphosate and chlorpyrifos – should be banned.

The panel set up by the government had proposed to end the use of the three chemicals from December 1, as they are considered to be harmful to people’s health and cause soil contamination.