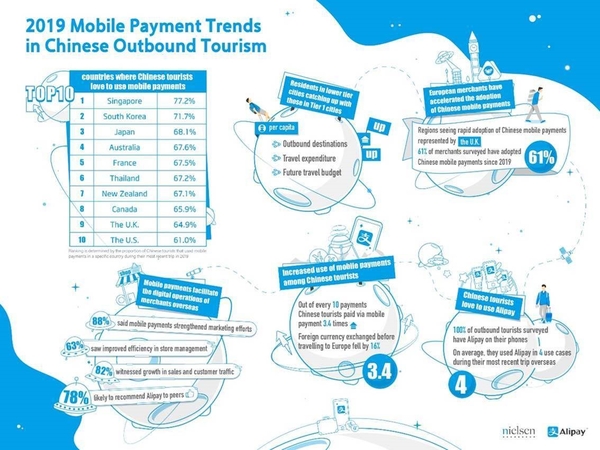 Thailand ranked among the global top 10 for mobile payments by Chinese tourists, fuelled by the country’s “maturity” in mobile payment solutions, a joint report by Nielsen and Alipay said.

The study reported the latest trends in Chinese outbound tourism and the consumption habits of these travellers for the third consecutive year.

Surveying 4,837 Chinese travellers and 547 overseas merchants, the report found that the Southeast Asia region maintained its leadership in mobile payments by Chinese travellers, with Singapore and Thailand positioned at number 1 and 6 respectively in global ranking. Other nations on the list of “Top 10 countries where Chinese tourists love to use mobile payments” include South Korea, Japan, Australia, France, New Zealand, Canada, the UK and the US.

In Singapore, an early adopter of Chinese mobile payment solutions, almost all merchants (97 per cent) indicated steady improvement compared to the previous year in terms of mobile payment usage and the amount of mobile spending by Chinese tourists.

In Thailand, Singapore, Malaysia, Japan and South Korea, the usage rate of mobile payments among Chinese tourists was high, reaching 70 per cent in both 2018 and 2019, the report stated.

The total amount spent by Chinese tourists increased by 14 per cent in Singapore and Thailand and 23 per cent in Japan and South Korea between 2018 and 2019.

In 2019, destinations located a four-hour flight away such as Thailand, Japan, South Korea and Singapore remained the most popular choices for Chinese tourists.

In addition, the US, Australia, UK and Canada were also among the top 10 countries, which indicated that Chinese tourists were fairly keen on travelling to English-speaking countries.

In 2019, compared to last year, Chinese tourists born in the 1990s spent nearly 12 per cent more on a single overseas trip, while those born in the 1980s spent 15 per cent more. An underlying reason for the increased travel expenditure may be the desire for more in-depth experience of local cultures. Around 70 per cent of millennials would proactively search for information on places to eat, stay and visit even after arriving at their travel destinations. More than 50 per cent of those born in the ’90s chose to stay at local homestays and B&Bs rather than hotels. Some 34 per cent of the post-1990 generation attended concerts or stage performances at their travel destinations, while 26 per cent experienced local outdoor sporting activities.

“The trend of more overseas merchants going beyond payment to adopt more digitalised services is a promising one, as it helps brick-and-mortar businesses become better integrated with the digital economy while bringing more personalised experiences for consumers around the world,” commented Angel Zhao, Ant Financial’s International Business Group president. “Alipay, as part of the Alibaba ecosystem, aims to support the digital transformation of businesses and we will continue to innovate and help merchants around the world benefit from the rise in global tourism.”

Some of the key findings:

* Among the countries surveyed, the usage of Chinese mobile payments in Singapore, South Korea and Japan was highest, with Singapore in the leadership position.

* Some 77% of Chinese tourists in Singapore used mobile payments for their transactions.

* More overseas merchants intend to deepen the use of Chinese mobile payment platforms as they go digital.

* The proportion of Chinese tourists using mobile payments when travelling abroad in 2019 remained stable compared to 2018.

* In 2019, 3.4 out of every 10 payments made by each Chinese tourist overseas were mobile payments, a slight increase from the previous year (3.2 payments).

* The per capita total amount of mobile payments made by outbound Chinese tourists increased by 18% compared to the previous year.