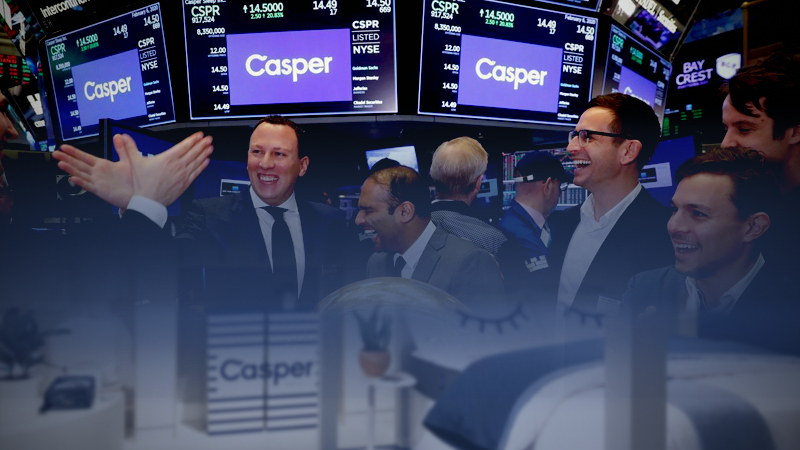 Bed-in-a-box seller Casper Sleep Inc. rose in its trading debut after an $100 million initial public offering priced at the bottom of a reduced range.

Shares of Casper rose as much as 32% Thursday and were up 23% to $14.75 apiece at 1:22 p.m. in New York, giving the company a market value of $585 million. That's just over half of the online mattress retailer's $1.1 billion valuation in a private funding round last year.

Casper sold 8.35 million shares Wednesday for $12 each. This came after it cut its price target significantly from an initial range of $17 to $19.

"We're seeing consumers come back very frequently to buy from Casper," Chief Executive Officer Phillip Krim said in a Bloomberg TV interview. "That will continue to accelerate as we bring more products to market."

Casper priced its shares on the same day as PPD Inc., a biotechnology and drug-research services firm that raised $1.62 billion, pricing its shares at the top of its target for the offering. In the past year, such business-to-business firms, especially software makers, have tended to fare better in their IPOs than consumer-focused companies.

New York-based Casper, founded in 2014, became one of the leading brands in its niche thanks to its pioneering status and savvy marketing. Since then, a slew of competitors have emerged in the U.S. and abroad. From 2016 to September 2019, Casper spent $422.8 million on marketing, according to an earlier filing.

The offering was led by Morgan Stanley, Goldman Sachs and Jefferies Financial Group Inc. The company's shares are trading on the New York Stock Exchange under the symbol CSPR.