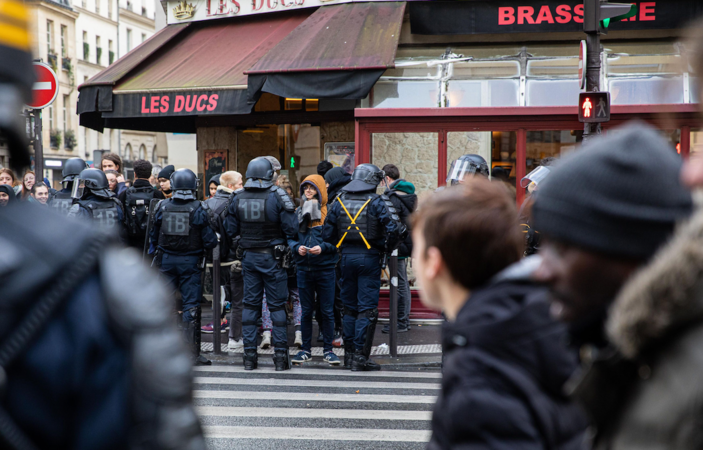 BlackRock's Paris office was briefly barricaded on Monday by climate activists who sprayed red paint on the floors and covered the walls with graffiti before leaving the premises of the world's largest asset manager.

Youth For Climate France said in a statement that it targeted BlackRock for its investments in companies that damage the environment, listing Vinci, Total, BNP Paribas and Societe Generale among them.

"Our activists left BlackRock's headquarters of their own accord after having occupied it for more than an hour," the group said in a tweet.

BlackRock offices in other cities have drawn similar protests in the past few years, including its New York headquarters and London. Protesters have trailed its chief executive officer, Larry Fink, to events and speaking engagements. Beyond climate concerns, activists have also voiced objections to its holdings in companies that manufacture guns and run private prisons.

About two-thirds of BlackRock's $7.4 trillion under management is held in index funds, putting it among the largest owners of a huge swathes of public companies and complicating the issue of divestment because it's a passive investor.

The climate protests on Monday come after BlackRock CEO Fink issued his strongest warning yet to business leaders on the environmental crisis, and said his firm will take steps to address the issue across the thousands of companies in which it invests.

This month, it rapped Siemens on the knuckles for its handling of a controversial rail contract for an Australian coal mine, which has come under criticism from environmental activists. BlackRock, which is Siemens' biggest shareholder, said the German industrial company needs a "more thorough review of the potential risks."

In France, BlackRock has become a lightning rod for many demonstrations. Last month, its offices were stormed during protests against President Emmanuel Macron's pension reforms on speculation that the company had helped shape the plan.

"We strongly condemn the violent intrusion and acts of vandalism on our premises this morning," BlackRock said in a statement after the Paris protest. "These acts, like the attempts to intimidate our employees for several weeks, are unacceptable and intolerable."

During the occupation of BlackRock's Paris premises, live feeds posted online showed police vans seeking to cordon off the area, after dozens of climate activists had entered the building. The walls inside were covered with graffiti.

"BlackRock assassins" and "I want to live" could be read on walls and windows. There were also anarchist logos. One activist interviewed on the live-feed said the blockade was also a protest against the French state's inaction on climate issues.

BlackRock's Paris offices are in the center of the city, a five-minute ride away from the iconic Louvre pyramid. Many members of the company's staff in Paris were still in the building as the protest unfolded. Security personnel appeared to have been overwhelmed by the activists.