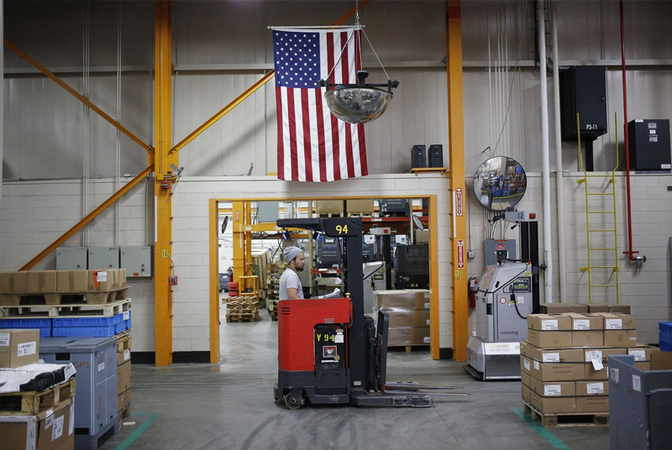 America's service industries in February enjoyed the fastest growth in a year as orders surged, showing momentum in the biggest part of the economy just as coronavirus concerns started to become more widespread.

The Institute for Supply Management's non-manufacturing index unexpectedly rose 1.8 points to 57.3, according to data Wednesday. The median forecast in a Bloomberg survey called for a decline to 54.8. The third straight increase capped the longest stretch of gains since 2014. Figures above 50 show expansion.

A gauge of orders increased to the highest level since June 2018 and a measure of employment reached a seven-month high. While the improvement within service industries is at odds with a setback at factories during the same month, the risk for the economy is that the virus causes consumers to shy away from travel, entertainment and dining out.

"Most respondents are concerned about the coronavirus and its supply chain impact," Anthony Nieves, chair of the group's non-manufacturing business survey committee, said in a statement. "They also continue to have difficulty with labor resources. They do remain positive about business conditions and the overall economy."

A separate gauge of service industries from IHS Markit dropped 4 points to 49.4, marking the first time since October 2013 that the measure has shown declining activity.

At the same time, business activity at health care providers is likely to increase amid industry efforts to battle the virus and ramp up production of medical supplies. Construction and real estate firms, meanwhile, are staying busy as home sales heat up.

Nearly 40% reported that orders were higher in February, the most since June 2018. Only 8% reported a decline, the smallest share since April 2018.

"Even in spite of this pandemic threat, they're still remaining optimistic about business conditions and the overall economy," Nieves said on a call with reporters. "The only thing that derails this growth in this sector would be something geopolitical or catastrophic. Well, we are on the fringe of something that could develop or evolve into being catastrophic if it spreads beyond what we have right now."

The ISM's gauge of services employment increased to 55.6 from 53.1, indicating more firms are adding to their payrolls. Private hiring at service providers in the first two months of the year was the strongest since early 2018, according to data Wednesday from the ADP Research Institute. Official data are due Friday from the Labor Department.

The ISM's index of business activity among non-manufacturers, which parallels the group's measure of factory production, eased in February to a still-healthy 57.8 from 60.9. Order backlogs also increased, posting the strongest advance since May 2018.

The nation's manufacturers, according to the ISM's February data, experienced the brunt of the initial fallout from the virus. The group's gauge showed near-stagnant activity as production slumped on the heels of virus-disrupted supply chains in Asia.

While the manufacturing supplier deliveries gauge jumped by the most since June 2018, indicating longer lead times, the same measure for services ticked only slightly higher. Instead, the jump in orders, which was the largest in more than two years, played a bigger role in boosting the ISM non-manufacturing index in February.