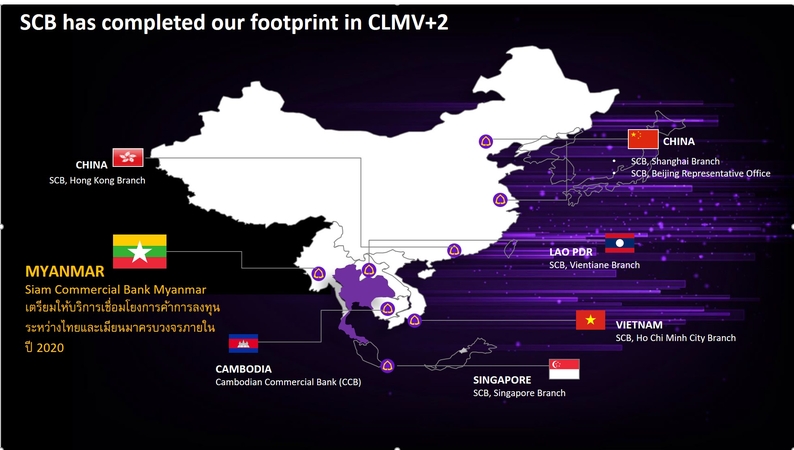 The Bank of Myanmar has granted Siam Commercial Bank (SCB) initial approval to set up a subsidiary in the country, SCB said in a statement on Friday (April 10) said.

Under the licence agreement, SCB will be able to extend banking services to retail customers in Myanmar from January 1, 2021.

The preliminary approval will allow SCB to make preparations for the commencement of operations in Myanmar and eventually provide financial solutions to corporates, small and medium-sized enterprises (SMEs) and retail clients.

SCB said the aim of this venture is to bridge trade and investment links between Thailand and Myanmar as well as trade within CLMV+2 countries, namely Cambodia, Laos, Myanmar, Vietnam, China and Singapore.

This set up will help support economic and industrial potential as well as long-term growth in the region. The bank expects to have the subsidiary up and running by the end of this year with a lending target of Bt7 billion in the first five years.

“Myanmar is among the region’s top potential economic and business countries attracting the interest of investors worldwide,” Arthid Nanthawithaya, CEO and chair of SCB’s executive committee, said in response to queries about the banking licence.

"We have had a representative office in Myanmar since 2012, and today we are very proud to be granted preliminary approval by the Central Bank of Myanmar as a subsidiary bank. This licence will allow SCB to open a subsidiary bank that is 100 per cent owned by SCB and provides the same comprehensive commercial banking services as local banks,"

A subsidiary banking licence holder is allowed to open up to 10 outlets in major business areas. In the early phase, SCB will focus on catering to Thai corporates with existing investments there and others who want to expand their trade and investment in Myanmar.

Over the past five years, Myanmar’s average GDP growth has been in the range of 6 to 7 per cent, while Thailand has a cumulative permitted investment in the country of about US$11 billion (Bt359.2 billion) after Singapore and China, he added.

Thailand is also Myanmar’s second largest trade partner after China, with trade valued at $7.6 billion last year. Hence, eyeing this potential, SCB is committed to expanding its business in the country, Arthid said.

"We are ready to serve clients with a full range of financial solutions like loans, foreign exchange, trade finance, supply chain management and cash management.

"Trends suggest constant economic growth across business and industrial sectors in Myanmar, and a highlight attracting foreign investors is that the cost of labour is not too high. Myanmar also offers Thai investors an opportunity to establish a production base for exports. At present, there are over 100 Thai businesses operating in Myanmar with our support. Our clients are from diverse sectors such as consumer products, energy, industrial estates, manufacturing, and agro-industry. We have set a lending target of Bt7 billion by 2024," the CEO said.

Since Myanmar's retail banking market is a very attractive opportunity with the country's population of 54 million, SCB will also consider providing options of financial products and services to local customers, including deposits, personal loans, digital banking, and wealth management.