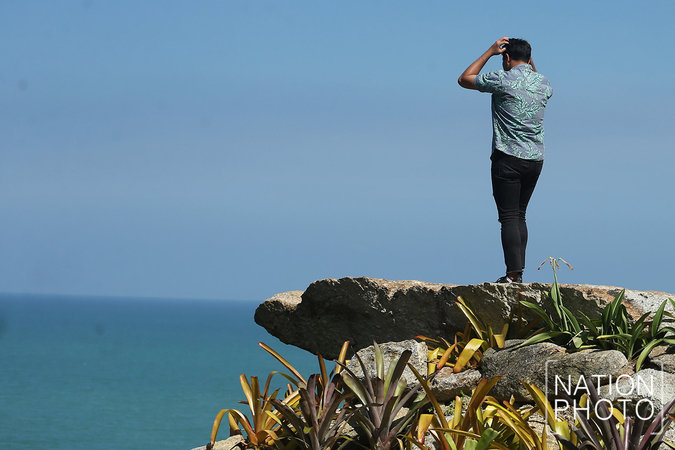 A tourist looks out at the Khanom-Sichon Sea in Nakhon Si Thammarat province on December 10.

The second wave of the Covid-19 outbreak will cost local tourism around Bt16 billion during the New Year holidays, says an economist.

Anusorn Tamajai, former dean at Rangsit University’s Faculty of Economics, estimated that the second wave of Covid-19 infections would cost the local tourism industry Bt14.1 to  Bt16.9 billion in lost revenue during the New Year festival.

His analysis comes amid rising cases of local infections after some infected patients entered Thailand illegally from Myanmar. While the United States has the most number of cases with over 16.5 million, followed by India -- almost 10 million -- Thailand ranks 151st among countries with over 4,000 cases.

He was optimistic that the number of new cases in Thailand would be contained as the government had put in place an effective tracing system.

Prime Minister Prayut Chan-o-cha earlier insisted that Thailand had not yet experienced a second wave.

Anusorn, however, said that concerns over the rising number of new cases was expected to discourage many people from travelling and spending during the year-end holiday season.

Revenue from Thai travellers during the last New Year was Bt28 billion. Many research houses have estimated that Thai consumers will cut their spending significantly while those who live in Bangkok are expected to spend about Bt30 billion, but it is below the average spending of the past two decades, he said.

Anusorn, however, added that if Thailand could not contain the second wave the Thai economy next year may grow less than 4 per cent, while the rising number of new cases in Thailand’s trading partner countries would adversely affect Thai exports up to the first quarter of next year.

The National Economic and Social Development Council has forecast that the Thai economy will expand 4 to 5 per cent next year.

Regarding financial markets, Anusorn predicted that gold price would test a barrier at US$2,000 per ounce, as investors are worried about risk assets stemming from the delay in the US stimulus package and the possibility of a no-deal Brexit.

The Thai baht is expected to appreciate further after it rose almost 4 per cent last month. The baht could rise to Bt29.50 per dollar by the end of this year, strengthening from the Bt30 level, he predicted. Foreign investors had net buys of Thai stocks worth Bt50 billion over one month and bonds worth Bt20 billion. They could sell Thai financial assets to make a profit before Christmas, he warned.

Meanwhile, the rising  unemployed benefit claims in the US had put high pressure on the dollar, he said.

The US economy has shown signs of decelerating at the end of this year. The return of the global economy to normal next year would depend on the effectiveness of the Covid-19 vaccines, he said.

He did not expect the US Federal Reserve and Bank of Japan to further loosen monetary policies during their meeting next week.