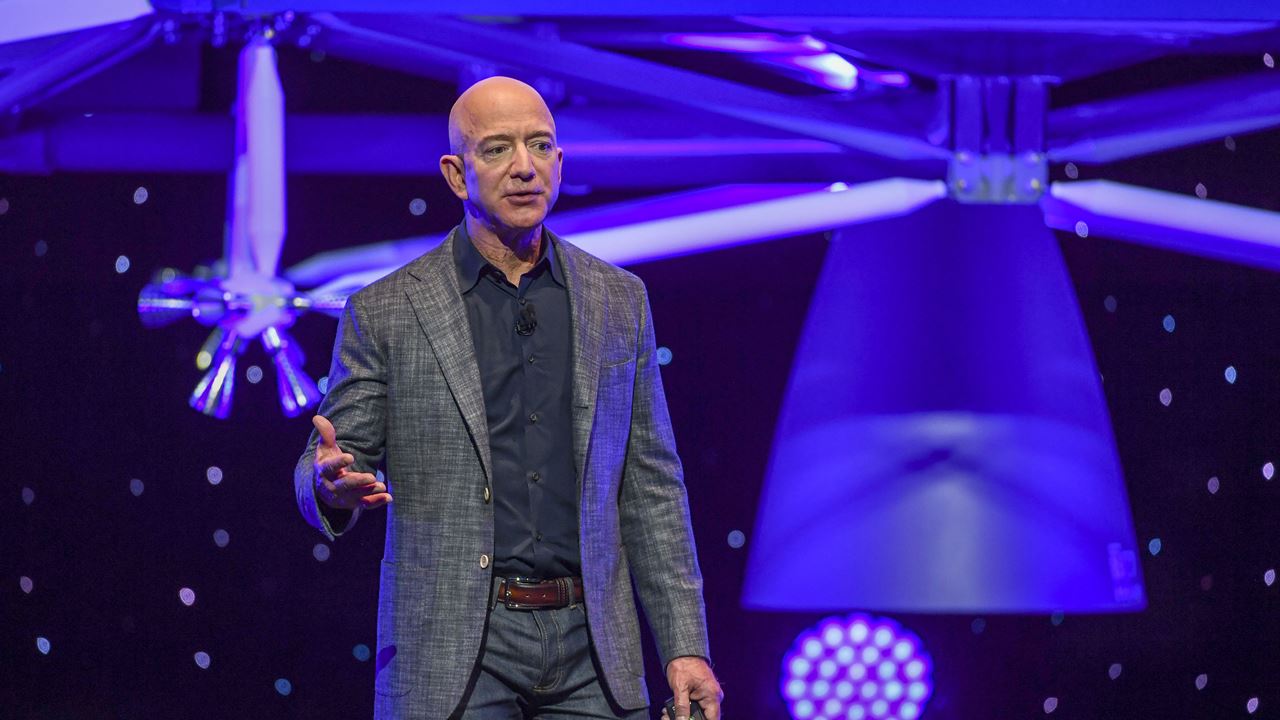 Step back like a billionaire: Previous tech titan exits offer examples for Bezos

SEATTLE - There are few chief executives today as closely tied to their companys image as Jeff Bezos is with Amazon.

And Bezos' departure as CEO Monday, handing over the top job to his longtime lieutenant Andy Jassy, likely won't change that connection anytime soon. Bezos, 57, said he plans to continue working for the company he created as executive chair, a title created for him, where he will focus on innovation and on improving Amazon's workplace safety record.

The transition isn't just the most radical shake-up in Amazon's corporate ranks; it's the biggest professional shift for Bezos in the three decades that he's run the company. As Bezos became the world's wealthiest person with an estimated net worth of $199 billion, according to the Bloomberg Billionaires Index, he's developed a variety of interests. Those include some wildly expensive ones - such as his space-travel company Blue Origin - that will get more of his focus in the coming years. Bezos plans to ride to the edge of space aboard a Blue Origin rocket just two weeks after stepping down.

There's not much of a template for business titans who step back from their top jobs. Some have spent time burnishing their image with philanthropy, such as Andrew Carnegie and Bill Gates, who, like Bezos, became lightning rods for criticism of the companies they ran. Others have focused on the playthings of the superwealthy, such as running sports teams or traveling to exotic locales on their yachts. A few, such as former eBay CEO Meg Whitman, even dabbled in politics.

Here's a look at the post-executive lives of a handful of other billionaire tech bosses:

Q: When he did step down as CEO?

A: The Microsoft co-founder began moving away from the software giant in 2000, when he gave the chief executive post to his longtime lieutenant Steve Ballmer. Gates, 44 at the time, took on the role of chief software architect and chairman. Like Bezos, Gates was closely identified with Microsoft, and his departure was carefully orchestrated to ease the transition as the company away from its founder.

In 2008, Gates stepped down as chief software architect and gave up his day-to-day duties at the company to spend the bulk of his work time at the Bill and Melinda Gates Foundation. He stepped down as Microsoft's chairman in 2014, and left the board altogether last year.

In May, Gates acknowledged through a spokeswoman that he had an extramarital affair with a Microsoft employee nearly 20 years ago, and Microsoft said its board investigated the "intimate relationship" shortly before Gates resigned as a director last year.

Q: What did he do after leaving the CEO job?

A: As Microsoft CEO, Gates had a reputation as a brass-knuckled competitor, so much so that Microsoft became the target of lawmakers and regulators around the globe for using its dominant Windows operating system to crush rivals. In the past two decades, though, Gates has become better known for his philanthropy, creating the Bill and Melinda Gates Foundation with his wife, spending billions addressing global inequity in health care and education. As the coronavirus raged, he emerged as a leading voice for science-based approaches to end the pandemic.

And like Bezos, Gates was the world's wealthiest person when he left the CEO job.

Q: When did he step down as CEO?

A: The Apple co-founder first left his job as the company's CEO in 1985 when he was forced out by the board after the commercial failure of the Lisa desktop computer. The 30-year-old Jobs lost a power struggle with his successor, John Sculley.

Jobs returned to Apple a little more than a decade later, and led its revival as it passed ExxonMobil to become the world's most valuable publicly traded company in August 2011. At the time, Jobs was struggling with complications from pancreatic cancer, and he turned the CEO job over to Tim Cook later that month. Jobs died less than two months later.

Q: What did he do after leaving the Apple CEO job the first time?

A: Unlike Bezos, Jobs' first departure as CEO came early in his career. And he had much to prove.

Jobs quickly launched a new computer company NeXT after his Apple exit. Jobs also moved beyond technology, spending $10 million to acquire Pixar, a graphics supercomputing company owned by the filmmaker George Lucas. Pixar went on to enormous commercial success, sparking the computer-animated movie market with its 1995 hit "Toy Story." The Walt Disney Company agreed to purchase Pixar for $7.4 billion in 2006.

While NeXT never emerged as a tech power, Apple, without Jobs at the helm, floundered. The company bought NeXT in 1996, and Jobs returned to the company he founded as an adviser. He resumed his CEO responsibilities in 2000, and oversaw Apple's resurgence as it introduced wildly popular mobile devices such as the iPod, the iPhone and the iPad.

Q: When did they step down as CEOs?

A: The Google co-founders stepped down from their jobs running the day-to-day operations of the web search giant in 2019. Page served as CEO of Google's parent company, Alphabet with Brin as president. Both were 46 at the time.

Page had actually turned over the CEO job once before, in 2001, to Eric Schmidt. He took the post over again 10 years later, when Schmidt stepped down.

At the time, Alphabet was facing investigations from regulators and lawmakers in the United States and abroad for alleged anti-competitive conduct that thwarted the rise of rivals. That scrutiny has only intensified since they stepped back.

Q: What did they do next?

A: Both Page and Brin have remained largely quiet since leaving their executive roles at Google. Like Bezos, Page has been drawn to the skies, putting money behind Kitty Hawk, a flying-car start-up. His investment predates his exit as CEO, though news reports indicate his continued involvement.

Brin, too, has invested in aviation, pouring money into his secretive airship company, LTA Research and Exploration, according to TechCrunch. Brin also began investing in the company before stepping away from his Alphabet duties.

Q: When did he step down as president?

A: Cuban and Broadcast.com CEO Todd Wagner sold their four-year-old audio streaming company to Yahoo for $5.6 billion in 1999. Cuban was 40 at the time.

A: An avid basketball fan, Cuban used some of his newfound riches to buy the NBA's Dallas Mavericks in 2000. He has emerged as one of the league's most outspoken and most recognizable owners.

Bezos, too, has an interest in owning a pro sports team and his name has surfaced as a possible NFL owner.

Cuban also went onto becoming a media figure, starring in "Shark Tank," the reality television show where he and other successful business leaders support or reject a new entrepreneur's ideas.

Cuban also occasionally engages in politics. In 2017, Cuban said he was "considering" a presidential campaign. That never came to pass. He's described his politics as leaning toward libertarianism but with a desire for effective social safety nets, calling himself "independent all the way through."

Q: When did she step down as CEO?

A: Whitman led eBay for a decade, emerging as one of the tech industry's most powerful women, before stepping down in 2008. When she left the company, she was 51 and called the move retirement.

But Whitman returned to a CEO post at Hewlett-Packard in 2011, leading the struggling computer printer and server company through brutal cost-cutting phases, and ultimately its breakup into two business. Whitman led the business-technology unit, Hewlett-Packard Enterprise before retiring again in 2018 at 61.

She returned to the CEO post one more time, running the short-lived, short-form video service Quibi last year. Quibi shut down six months after its launch. Whitman was 64 at the time.

Q: What did she do after leaving those jobs?

A: Retirement never seemed to stick for Whitman. After leaving eBay, Whitman declared her candidacy for governor of California, and spent more than $100 million of her own money as a Republican candidate in a losing bid against Jerry Brown.

Whitman joined HP shortly after those political aspirations fizzled. Even so, Whitman remained engaged in politics. She served as finance co-chair of Chris Christie's presidential campaign during the 2016 Republican primaries, but broke from the party when it nominated Donald Trump. She endorsed Hillary Clinton for president in 2016, and spoke at the 2020 Democratic National Convention in support of Joe Biden.