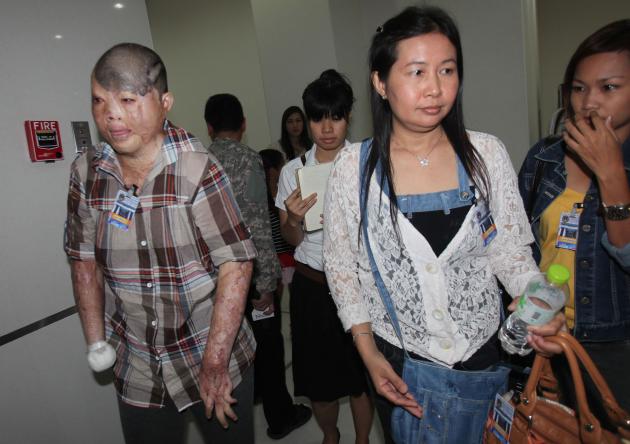 The Central Administrative Court yesterday ordered the Bangkok Metropolitan Administration (BMA) to pay Bt3.4 million in partial compensation to the parents of 12 victims of the New Year's 2009 Santika nightclub fire.

This amount is equivalent to 20 per cent of what the court believes the plaintiffs should get for the damages they suffered in the blaze.
The Santika fire, which broke out in the early hours of January 1, 2009, killed 67 people and left more than 100 others seriously injured. The parents of some victims lodged a complaint against the BMA on December 28, 2009, on grounds that the city had failed to strictly enforce building regulations and fire codes. According to them, the tragedy could have been avoided if regulations had been strictly enforced.
The lack of enough fire exits was cited as one of the reasons why many revellers were unable to get out of the nightclub, which caught fire due to a fireworks display.
The compensation amount for each of the 12 plaintiffs ranges between Bt68,000 and Bt740,000, and will be subject to an interest rate of 7.5 per cent, calculated from the day the court order was issued to the day the payments are made.
No BMA representative was present in the courtroom yesterday. Deputy Bangkok Governor Malinee Sukvejvorakij said BMA will file an appeal in line with normal legal procedures. “We understand the victims’ losses and really want to help. However, at this point, we need to proceed in line with legal procedures. Without an appeal, the BMA might face a probe by the Office of the Auditor-General,” she explained.
She added that the BMA would only pay if the Supreme Administrative Court rules that it do so.
Chairat Saeng-arun, a lawyer for the plaintiffs, said the court had instructed the BMA to pay the compensation within 30 days. “This is separate from the civil case filed by the victims and their relatives,” Chairat said.
The BMA was ordered to shoulder 20 per cent of the compensation because there were many parties found responsible, among them the owner, Wisuk Setsawat.
Malee Thanompanyarak, whose sister died in the fire, said yesterday that Wisuk had initially offered Bt50,000 in compensation but had paid only Bt40,000. “He has never contacted us again,” she said.
Last year, the Bangkok Southern Criminal Court sentenced Wisuk to three years in jail for negligence. The court ruled that Wisuk had failed to obey building regulations and to provide safety equipment and emergency exits at his Ekamai nightclub. The court also found him guilty of allowing minors to enter the site. Wisuk is free on bail pending his appeal of the ruling.