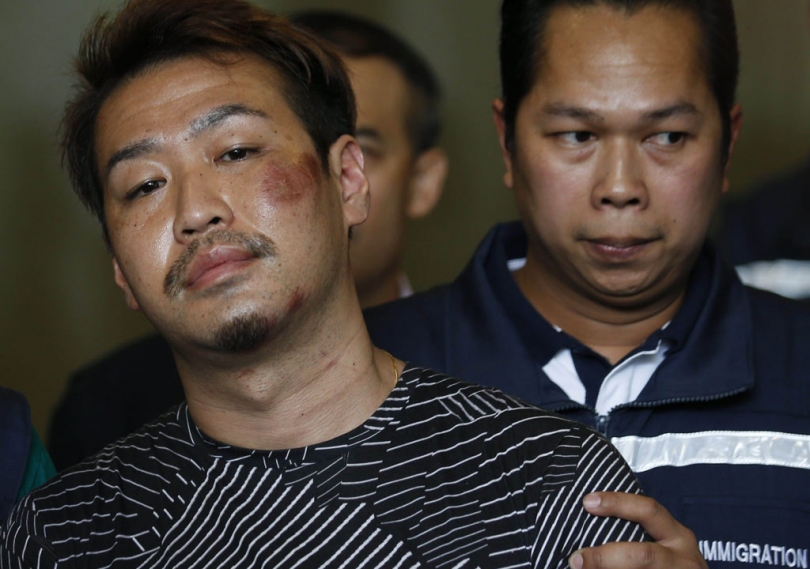 Key Yakuza suspect nabbed in Bangkok, to be extradited to Japan

A suspected key member of Japan’s Yakuza organised crime world was arrested in Bangkok yesterday on an Interpol red alert for his arrest warrant issued by authorities in Kobe, police said.

Shuhei Yoshizawa, 34, wanted in Japan for alleged racketeering and extortion, was nabbed at 2am while driving on Rama IV Road, said Pol Lt General Nathorn Prausunthorn, commissioner of Immigration Police.
Japanese police had sought cooperation from their Thai counterparts via Interpol.
They indicated that Yoshizawa, the boss of a local branch of the Yamaguchi-gumi syndicate in Osaka, fled to Thailand after a major roundup in Japan last year, he said.
Some 25 members of his gang were arrested but Yoshizawa escaped and arrived in Thailand at the end of March last year, Thai police said.
Thai immigration records showed him entering and exiting the country 45 times over the past year and changing his accommodations several times, Nathorn said.
His movements came to police notice as he has a Thai wife and visits night entertainment establishments in RCA on Rama IV Road regularly, he said.
In the early hours of Sunday, police tracked Yoshizawa and his wife driving on Rama IV Road.
He stopped the car and got out after noticing that he was being followed, Nathorn said.
He was captured on the road and taken to his room in a condominium on Rama IV Road, where it was searched, police said.
Japanese authorities informed the Thai authorities that more than 500 victims were cheated by this Yakuza gang, Nathorn said.
The criminal organisation might have reaped more than 600 million yen (Bt180 million) from the racketeering and extortion, he said.
Yoshizawa would be extradited to Japan, he said.
If there are any Thais involved in the crime, they would be prosecuted in accordance with Thai laws, he said.
However, police have found no evidence so far linking his local wife with the crime, he said.