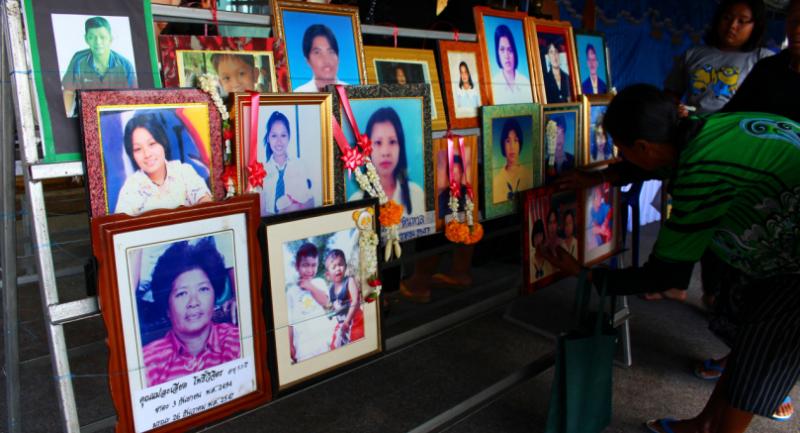 LOCAL people in Ban Nam Khem in Phang Nga who survived the devastation of the tsunami 12 years ago are still struggling to develop a community that has a safe and sustainable future.
Yesterday marked the 12th anniversary of the Boxing Day Tsunami that ravaged the Andaman coast, claiming more than 8,000 lives in Thailand. Ban Nam Khem in Takua Pa district suffered the worst, with the village wiped out by the gigantic wave. Ban Nam Khem had the highest death toll in the country, with around 1,300 people killed.
Tsunami Victim Network coordinator and active citizen of Ban Nam Khem Montri Kongkrichak said his home town had almost fully recovered from the devastating wave in 2004.
“Everyone here lost someone or something in the tsunami disaster. The wave totally destroyed our community, but due to the wave, we are building our community again and this time we are growing stronger,” Montri said.
“The scars from the tsunami will be with us forever, but now we are looking ahead for more secure and sustainable future of our community. We are going to achieve this goal by the community’s power in order to prepare ourselves for unexpected disasters and ensure that local people will lead the sustainable development for our own community.”
He said the clearest local initiative was the disaster preparation plan, drawn up by local people, to forge common procedures in the event of emergencies or another disaster. The evacuation routes, safe areas and volunteers were set up with agreement of local people and emergency drills practised regularly.
“The tsunami brought the people together and made our community stronger. Our disaster preparation plan has become an example for other communities in the country to follow and if there is a new disaster coming, we are now ready,” he said.
Villager and emergency response volunteer Somrak Juddej said the tsunami changed his life and views about volunteer work.
“For all my life I was fisherman and worked hard every day at sea to feed my family. Before the tsunami, I did not see the importance of volunteer work, but when my home was devastated and my family shattered; many strangers offered me a lot of help. So, I decided to become emergency response volunteer,” Somsak said.
Sakda Phanrangsri, another Ban Nam Khem resident, said community members were also planning for a sustainable future by promoting local tourism and a seafood business as a new economic activity for the town.
“Right now the village receives around 2,000 tourists a day during the high season. But the villagers don’t get much profit from tourism, because the tourists only get to the village to take a boat to the Surin and Similan Islands and these services are also operated by outsiders,” Sakda said.
So, people in the community started to think about tourism that would give benefits to local people and he planned to promote that trade in the community by using local fresh caught seafood. “We have long been a fishing community, but the tsunami helped us realise that we cannot rely on a sole source of income and that our community could be a seafood hub for the tourists – somewhere they can enjoy fresh seafood and enjoy a fishing tour with a local guide,” he said.
“We will develop from the resources that we have and make sure what we do is sustainable and makes our community stronger.”

Survivors remember those lost
On the anniversary of the tragedy yesterday, hundreds of the tsunami victims and relatives of the deceased gathered for a remembrance ceremony at the small village yesterday. Muslim, Christian and Buddhist ceremonies were performed to make merit for the deceased in the morning event.
A disaster drill was also held to to help local emergency volunteers become ready for a major accident in the sea, while in the evening people lit candles to remember those who lost their lives in 2004.
Remembrance ceremonies were held throughout the area, but in Ranong local people rehearsed a disaster drill as governor Jatupot Piyumputra said this year authorities wanted to encourage knowledge and disaster readiness.