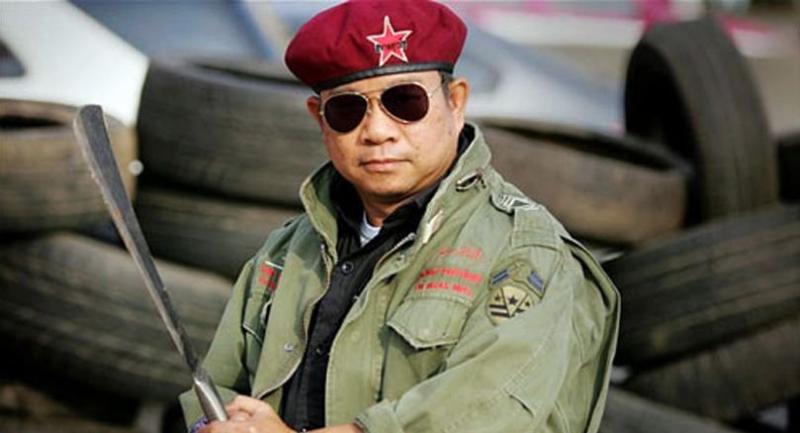 SOME OF THE firearms seized from a fugitive red-shirt leader’s house were snatched from the Army by protesters during the 2010 political upheaval, Pol Colonel Paisit Wongmuang, chief of Department of Special Investigation (DSI), said yesterday.
The raid by troops and police targeting Wutthipong Kacha-thamkhun, alias “Ko Tee”, in Pathum Thani province on Saturday, allegedly unearthed a large cache of weapons including four M-16 rifles, one M79 grenade launcher, 13 other guns, and about 5,000 rounds of ammunition.
Three red-shirt banners and other material deemed to violate the lese majeste law were also found.
“After checking the firearms, we found that they belonged to the Army and were snatched by protesters during the demonstration in May 2010,” Paisit said.
He was referring to the protest by the National United Front of Democracy Against Dictatorship, also known as red shirts, calling for then-prime minister Abhisit Vejjajiva to step down. As the protests escalated, the government mounted a crackdown, resulting in deaths of civilians and soldiers.

Terrorism charges
Authorities believe Wutthipong is hiding in Laos. Referring to a Thai request for Laos to deport him, Paisit said that if he returned to Thailand he would be charged with terrorism.
Wutthipong has also been linked to the controversial and recently besieged Dhammakaya Temple in Pathum Thani, as he pledged in a YouTube programme to provide weapons to help the temple. Authorities have tried to enter the temple to find and arrest former abbot Phra Dhammachayo on charges including money laundering.
Paisit said that intelligence reports from the DSI, Army and police suggested that core red-shirt leaders in the 2010 protests had been seen near Dhammakaya Temple. Meanwhile, a DSI source said police requests to search Boonraksa Building inside the temple had been rejected because there were weapons belonging to the red-shirt leaders hidden there. The temple only permitted a search after the weapons had been moved out of the building, the source claimed.
Police yesterday continued their raids in nine locations in seven provinces in a hunt for more weapons possibly connected to Wutthipong.