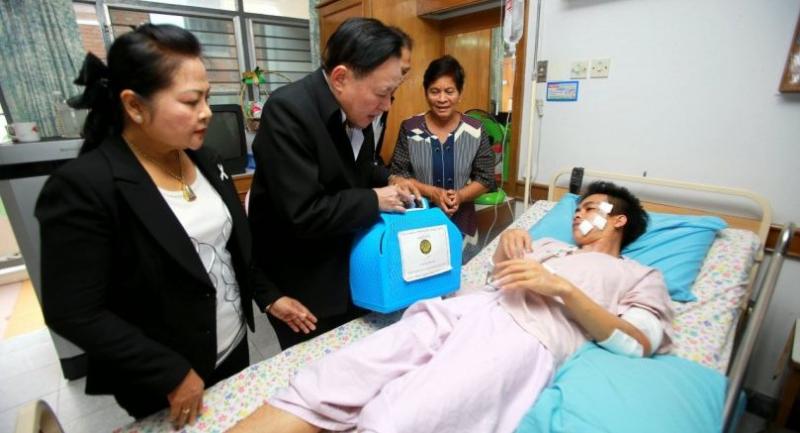 Camera catches images of four ‘linked to BRN’ in the act; at least 80 people injured

A MASSIVE HUNT has been launched for four men who were allegedly involved in the double blasts at a Big C department store in Pattani province on Tuesday after security camera footage caught them in the act. Meanwhile, the number of people reported injured rose to 80, including children.
Colonel Pramote Prom-in, spokesman of the regional Internal Security Operations Command (Isoc), said the footage showed two men park the pickup carrying explosives at the entrance of the Big C store and two others riding a motorcycle waiting for them at the front of the store.
A security source said authorities identified the four after checking files of suspects connected to security-related crimes as well as other evidence.
“We believe that the Pattani attackers can be linked to two others suspects, Abdulloh Samae and Harim Dolloh. Arrest warrants were issued for Abdulloh for a car-bomb explosion in Pattani on February 26, 2016 and for Harim after a blast at a Southern View Hotel in the province on August 24, 2016,” the source said.
Investigators said evidence showed the bombers had mixed 100 kilograms of ammonia nitrate with petrol and then packed the mixture in two gas cylinders that were hidden in the stolen pickup. They said preliminary evidence led them to believe that the attacks were the work of the Barisan Revolusi Nasional movement, or BRN, and could be linked to a bomb attack on a market in Pattani’s Muang Pattani municipality on October 24. One person was killed and 20 others injured in that attack.
Pattani police chief Pol Maj-General Piyawat Chalermsri has ordered an investigation into the whereabouts of Nuson Kajornkam, the owner of the pickup, who was still missing yesterday.
Meanwhile, Isoc Colonel Peerawatch Sangthong said he personally condemned the Pattani attack as being the most wicked act imaginable as women and children were among the injured.
“Video footage from security cameras at the scene clearly shows the culprits, so it is expected that we will catch them soon,” Peerawatch said.
Army commander in chief General Chalermchai Sittisart has personally ordered the arrest of the attackers to bring them to justice as soon as possible. Security agencies have been put on high alert and ordered to collect intelligence to prevent future attacks.
The public was required to cooperate with officials in the hunt for the attackers, Peerawatch said, calling for ordinary people to be the eyes and ears for authorities to solve the crime.
He also praised security guards at the Big C store for their decision to evacuate people from the store after the first bomb blast. Their acts helped minimise the number of injured people, he said.
Southern Border Provinces Administrative Centre’s secretary-general Supanat Siranthawineti also denounced the attack.
Supanat said the attackers had stolen the pickup of a Thai Buddhist who worked in legitimate jobs, turned it into a car bomb and attacked a store where a large crowd of Thai Muslims were shopping. “What they did ravaged innocent people,” he said.
The centre will compensate people who were injured in the attack according to the law and give two student uniforms to each parent who was affected by the bombs.
Authorities believed the attackers intended “mass killing” since the car bomb was parked at the only entrance of the store and the initial explosion seemed intended to drive shoppers towards the exit. The first explosion was triggered by big firecrackers inside the store, sparking a panic that forced people towards the second bomb.
Meanwhile, students at Prince of Songkla University’s Pattani campus have been warned to avoid crowded places in the wake of the attack.
University deputy rector Imjit Lertpongsombat also offered condolences to the injured and others affected by the bombing. She urged students and university staff to monitor news about unrest in the region but to avoid panicking. People were also told to be more cautious about their surroundings and to avoid crowded places.
One student who asked not to be named said she was saddened by the attack in her hometown. “The people who did this are really mean – they hurt many innocent people,” she said.
Another student, Rohani Yeedam, said the attackers wanted to demonstrate their ability and create chaos to draw public attention. “They obviously wanted to kill innocent people. Otherwise they wouldn’t have planted the bomb outside a Big C store.”
The Public Health Ministry’s Mental Health Department has dispatched a team of psychiatrists to assist the victims of the bombing.
Dr Boonruang Triruangworawat, the department’s director-general, said Public Health Minister Piyasakol Sakolsatayadorn had ordered a team from Songkhlarajanagarindra Psychiatric Hospital and the Mental Health 12 Centre to go to the province.
Boonruang said the team would examine people who witnessed the attack for signs of post-traumatic stress disorder.