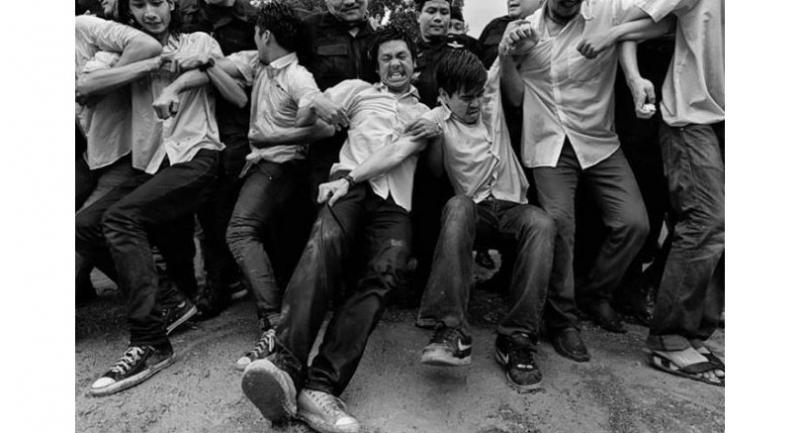 Jatupat, known widely as “Pai Dao Din”, was found guilty and initially sentenced to five years for the charge, but the term was reduced because he confessed, according to judges.
The student activist was arrested in December after sharing the BBC Thai report on Facebook.
However, the allegedly discourteous article was not deemed as defamatory to the monarch and thousands of people around the world, including many people in Thailand, have also shared it via their own social media accounts.
While authorities did not file charges or even a complaint against the London-based BBC for publishing the article, only Jatupat was arrested. His bail requests were consistently rejected as authorities regarded lese majeste as a serious charge possibly entailing severe punishment. Domestic and international campaigns over recent months have failed to free him on bail.
Prior to the court judgment, Jatupat, who had maintained his innocence for months, agreed to plead guilty after consulting with his family and legal team to get a more lenient sentence.
The lese majeste law, according to Article 112 of the Penal Code, reads: “Whoever defames, insults or threatens the King, the Queen, the Heir-apparent or the Regent shall be punished with imprisonment of three to 15 years.”
Jatupat’s jail sentence will be counted from when he was jailed on December 22, but it remains unclear whether he will be freed in June 2019, since he is also being prosecuted on many other charges, including resisting junta orders in a case that is being tried in military court.

‘Draconian law’
Jatupat has fought for social justice in his home region of the Northeast since he began studying as a law student at Khon Kaen University years ago.
He became well known after the 2014 coup as his group strongly criticised the military junta, while his rights of free expression have allegedly been violated repeatedly by authorities.
“It appears that Jatupat was singled out, from thousands of people who shared the BBC article, and prosecuted for his strong opposition to military rule rather than any harm incurred by the monarchy,” said Brad Adams, Asia Director at Human Rights Watch.
“His guilty verdict and jail sentence show yet again how Thailand’s draconian ‘insulting the monarchy’ law has been misused to punish dissenters.”
Jatupat won the Gwangju Prize for Human Rights awarded by South Korea’s May 18 Memorial Foundation this year, although the Thai Embassy in Seoul wrote a letter to the foundation to object to the award.