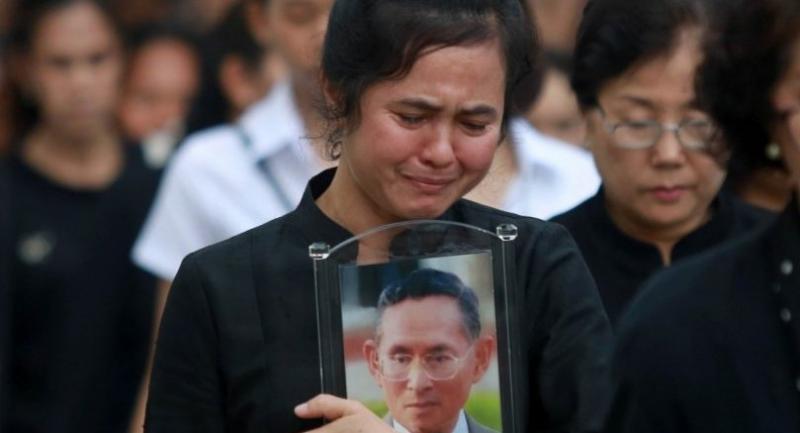 ‘I feel lucky to have been here’ to pay last respects

TENS OF THOUSANDS of people queued yesterday for their last chance to pay respects to the much-revered King Bhumibol Adulyadej before his Royal Urn, undaunted by the risk of bad weather and a long overnight wait.

The late King’s loyal subjects showed up at the Grand Palace despite reports of people waiting up to 11 hours for a chance to enter the Dusit Maha Prasat Throne Hall where the late King’s Royal Urn and Royal Coffin are enshrined.
Some mourners were particularly anxious, as yesterday was the last day that the Royal Household Bureau opened the throne hall to members of the public.
“He’s always in my heart. And I came here to see with my own eyes all the people who feel the same way,” Paiwarin Choeykhamdee, a 43-year-old teacher from Ubon Ratchathani province, said as she waited in line.
Pranee Chaipimonplin, a 63-year-old pensioner, said tears ran down her face every time she heard a song about the late King.
“I feel lucky to have been here today. I had long wanted to lay prostrate before his Royal Urn but my health had not allowed me to do so. But now I can come,” she said.
Narongrit Maisak, a 59-year-old company employee, said he still found it difficult to accept the departure of the King.
“It’s hard to accept such a huge loss. He’s a very good King,” he said.
Sucheep Kotchaporn, 44, who works at Thammasat University’s Rangsit Campus, said he had spent hours waiting to enter the Dusit Maha Prasat Throne Hall along with many others and nobody had complained about the wait.
“Their heart is really in what they are doing. They have come here because they love the late King,” he said. On Thursday, the Royal Household Bureau said 12,628,642 mourners had viewed the Royal Urn in the past 336 days. Donations received as a form of making merit for the late King now total Bt882,528,282.01, the bureau said.
On Wednesday, 96,150 mourners visited the Throne Hall and donated Bt6,437,999.25.
The last visitors were admitted into the hall at 3.40am yesterday.
Wednesday saw the highest turnout of any day, followed by Sunday (90,300 mourners), Tuesday (88,602), September 26 (73,889) and December 30, 2016 (73,614).
Kamonlak Sirichanchaikul said she joined the long queue of mourners at Dinsor Road at 10.30pm on Wednesday and reached the Rattanakosin Hotel at 6am yesterday. More than three hours later, she was allowed to enter the Grand Palace.

‘Silence filled the air’
“Silence filled the air as soon as we stepped into the Dusit Maha Prasat Throne Hall. I experienced some intense feelings and tears ran down my face. I believe other people felt the same way,” she said. She left the Grand Palace at 10am yesterday.
The late monarch’s Royal Cremation Ceremonies will be held from October 25 to 29, with the cremation taking place on October 26. The Royal Household Bureau will close the Dusit Maha Prasat Throne Hall to the public from today to prepare for the historic event.