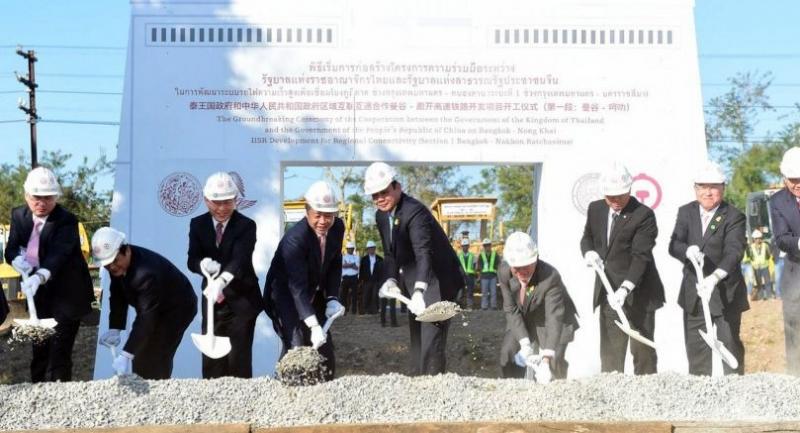 THE government has set a new target to call for construction bids for the Bt179-billion, 252-kilometre Bangkok-Nakhon Ratchasima high-speed railway by the end of next year, according to Transport Minister Arkhom Termpittay-apaisith.

Prime Minister Prayut Chan-o-cha yesterday presided over a ceremony to mark the commencement of the project in partnership with China at a historical site in Pakchong district’s Tambon Klangdong in Nakhon Ratchasima province, where King Rama V initiated construction of the country’s first Northeast-bound railroad more than a century ago.
The ceremony was also attended by a senior representative from the Chinese government, which signed a bilateral agreement with Thailand to provide high-speed train technology in late 2014.

Prayut said the project was the first phase of the Bangkok-Nong Khai high-speed train system, which would connect Thailand with Cambodia, Laos, Myanmar and Vietnam, as well as with China and India in subsequent stages.
Once completed, the route is meant to position Thailand as a transport and logistics hub for Asean and Southeast Asia.

The project is also meant to be connected with China’s high-speed train system as part of the One Belt, One Road cross-border development programme recently launched by China based on the ancient Silk Road, covering more than 60 countries in Asia, Europe and other continents. The premier said the project would boost Thailand’s economic potential and create new trade, investment and tourism opportunities for the benefit of towns and cities along the route from Bangkok to the northeastern provinces of Nakhon Ratchasima and Nong Khai, which border Laos.
Those benefits were aimed at helping reduce economic inequality and redistribute wealth, while saving commuting time and expenses between Bangkok and the Northeast.
In addition, it would reduce |pollution and the number of accidents caused by congested |highway traffic.
The premier also urged government agencies to reform city planning and related laws to take advantage of new urban development resulting from the high-speed train project.
Arkhom said a total of 13 construction contracts for the Bangkok-Nakhon Ratchasima route would be open for bidding in 2018 so that construction could be completed and the system become operational in 2021.

Subsidiary firms to be set up
Arkhom said Deputy Transport Minister Pairin Chuchotetaworn would be responsible for setting up subsidiary companies under the State Railway of Thailand to ensure the project was economically viable with a break-even point achieved in 30 years.

Separate business units will be established to take care of commercial and related operations so that they have flexibility to run the service and compete with low-cost airlines for passengers, since the project requires a massive investment of nearly Bt180 billion in the first phase.
Fares will start at Bt195 from Bangkok’s Bang Sue station to Ayutthaya and increase to Bt278 to Sara Buri, Bt393 to Pak Chong and Bt535 to Nakhon Ratchasima.

In the following stage, the route will be extended to Nong Khai, where the system will be connected with the high-speed train system in Laos, where China has also worked with Vientiane to create a linkage with its own high-speed train system in the southern Chinese province of Yunnan.
Besides Thailand and Laos, the cross-border system could be further extended into other Asean countries including Cambodia, Vietnam, Malaysia, Singapore and Myanmar.
In addition to the Thai-Chinese railway project, the Thai government has also worked with Japan to develop the Bangkok-Chiang Mai bullet train project with an investment estimated to be more than Bt400 billion.