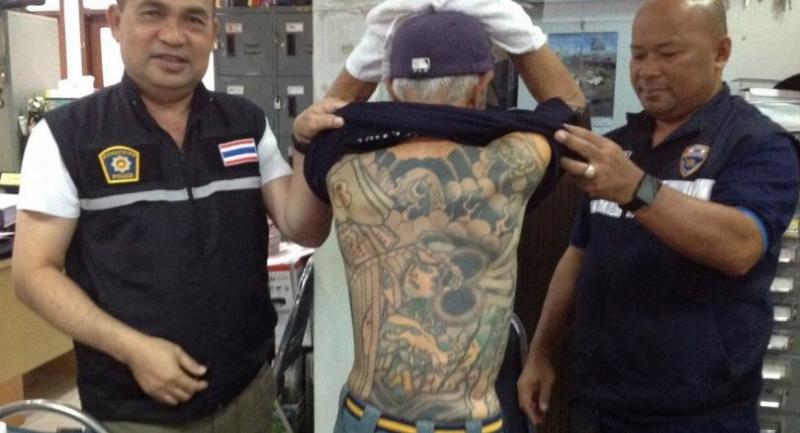 A FORMER “Yakuza” crime boss who is involved in a murder case in his country and laid low in Thailand for the past 13 years was arrested in Lop Buri province after photos were posted on Facebook showing his body covered in tattoos.

A Facebook user who himself has colourful tattoos all over his body, posted photos of Shigeharu Shirai, 72 in August last year and wrote: “When I grow old, I want to be like him. He is my idol.”
The photos were shared more than 10,000 times online and were believed to have caught the attention of Japanese police, who asked Thai authorities to move in.

He was alleged to have been involved in killing the boss of his rival faction by shooting him in the head in 2003.
Seven other accomplices to the crime were subsequently arrested and convicted. The Japanese officials told Chakthip in December that they had information that he had entered Thailand in 2005.

Wirachai said the suspect, who was arrested while he was on a walk in a park, admitted that he was the leader of the Yakuza sub-gang “Kodokai”.
“The suspect has not confessed to murder but has admitted that the victim used to bully him,” the spokesman said.
Following the request from the Japanese police, Thai police started tracking the suspect and found that he entered Thailand in 2005.
An investigation led police to a man with a similar identity who was married to a Thai woman identified only as “Arisara”. He earned an income working as a general worker, such as a painter. However, his marriage ended as he and his wife had frequent quarrels, the police spokesman said.

Tawatchai Jenakom, owner of a rice storage facility, said the suspect used to ask him for a job after his wife chased him out of the house.
Tawatchai described the former crime boss as having a bruised face after fighting with his wife.
Wirachai said the suspect had spent a quiet life in a bid to avoid being noticed and having his secretive past life revealed. Wirachai said police will invite Arisara for questioning.
According to the spokesman, Shigeharu’s friends would visit him about three times a year and give him money, about Bt10,000 each time. Police will expand their investigation to know about his friends and whether they were involved in any crimes in Thailand.

Thai police have charged the suspect with illegal entry, staying without permission and failing to notify authorities of his residence.
Wirachai said police will check whether Shigeharu committed any crimes in Thailand. If he did, he would be tried here first before being deported to his home country.