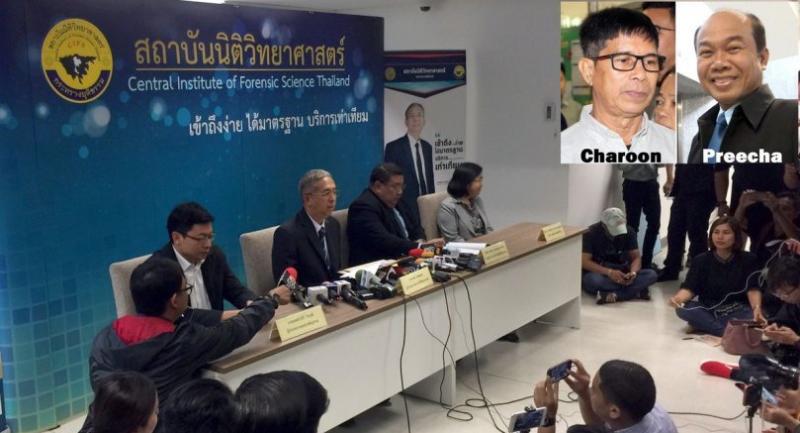 THE CENTRAL Institute of Forensic Science (CIFS) yesterday announced its findings in a much-publicised dispute that a retired police lieutenant was the owner of the winning lottery tickets worth about Bt30 million, not a teacher who claimed to be the legitimate owner.

Institute director Somn Promaros told a press briefing that his office had based its decision on the partial fingerprints found on the disputed lottery tickets.
“We have partial finger prints of retired Pol Lieutenant Charoon Wimoon on the tickets that the police sent to us to examine. We could not test the DNA on them because there was too much DNA on the tickets,” the director said. However, the chief police investigator said the forensic findings did not necessarily clinch the case for Charoon.
The five tickets pertain to the 533726 November 1 series last year.

The conflict over ownership of the winning tickets grabbed media headlines and drew public attention throughout the country after Preecha Kraikruan, a teacher of Thepmongkonrangsri School in Kanchanaburi province, came forward in late December to claim he had bought the winning tickets from a vendor but they had gone missing.
His interviews to the press implied that they were stolen but he never named Charoon as the thief. Because of his claims, police froze Charoon’s lottery winnings.
Although Charoon also lives in Kanchaburi, the two denied knowing each other.
The case garnered so much publicity that the national police chief had to step in and assign Provincial Police Region 7 deputy commander Pol Maj-General Krissana Sapdej to head the investigation.
Krissana submitted the tickets in question to the CIFS to examine the evidence on them.
Meanwhile, Preecha told reporters before the CIFS announced its findings that he would not give it much attention. “I guarantee one million per cent that those lottery tickets belong to me. Let us wait for the court’s ruling.” He argued that the lottery tickets would not have his fingerprints as, when he bought them, they were in a plastic bag. “When they went missing, they were still in plastic bag,” he claimed.
Krissana said yesterday he would wait for the official results before commenting.
However, he clarified that the findings of partial fingerprints of Charoon on the tickets could not be considered proof of his ownership.
“The lottery tickets in question certainly had Charoon’s fingerprints as he was the one who cashed the winning money,” Krissana said.
Police wanted to know whether there were fingerprints and DNA traces of others on the lottery tickets or not.
Police will wait for results of another test conducted by the police forensic unit, he said.
His team was expected to conclude the investigation by the end of this year before forwarding it to public prosecutors.
“We are waiting for test results from the Office of Forensic Science of the Royal Thai Police, probably next week,” he said.
He refused to reveal the evidence, saying it was significant to the case. The investigation team will meet on Monday to discuss the case.
The dispute in Kanchanaburi followed a similar case in Buri Ram province when Pansak Suachumsang, 31, filed a complaint with police that his two winning lottery tickets, worth Bt12 million, from the August 16 edition were stolen and that a couple from Roi Et had cashed the winning money.
However, forensic results found the couple’s DNA traces and not those of Pansak on the tickets and that the couple had bought three, not two winning tickets.
Amid wide discussions in social media, some senior police officers advised lottery enthusiasts to take photos of themselves with their tickets or sign their names on it in order to prevent possible disputes.