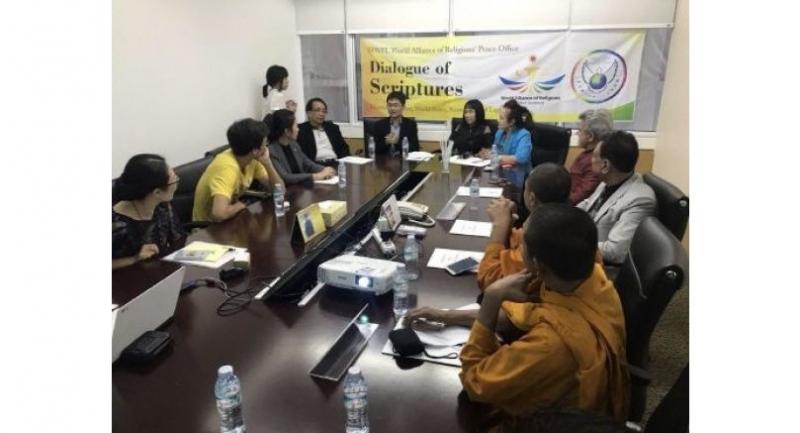 Dozens of leaders from various faiths – Buddhist, Islamic, Hindu, Christian, and Sikh – will gather at Wat Thatthong on Saturday afternoon for a seminar discussion on “The Eradication of Acts of Religious Discrimination” in the English language.

The event is hosted by Heavenly Culture, World Peace, Restoration of Light (HWPL), a non-governmental, non-profit organisation registered under the Korean Ministry of Foreign Affairs. The event is held as part of the United Nations Interfaith Harmony Week held from January 5 to March 5.
Every year, the first week of February is designated as the “International Religious Harmony State” to promote understanding, harmony and cooperation among religions by conveying messages of harmony and goodwill between their adherents during the period.
The dialogues of religions hosted by HWPL, called the World Alliance of Religions’ Peace (WARP) Office meetings, have been conducted in 216 offices from 124 countries, including Bangkok, to pinpoint the commonality of human values designated in religious scriptures.
“As we celebrate 2018 UN World Interfaith Harmony Week with ‘The Eradication of Acts of Religious Discrimination’, the HWPL WARP office will urge the eradication of religious extremism, thereby attracting world-wide attention to the absurdities of religious discrimination,” Emjay Ha of HWPL told The Nation via e-mail.
Followed the interfaith dialogue discussions in Bangkok and the South last month, HWPL returns Bangkok again with a variety of activities in the interfaith event this weekend. Kicking off at 3pm, there will be video presentation about how people think about religious discrimination. Buddhist, Islamic, Hindu, Christian, and Sikh leaders will discuss “The Eradication of Acts of Religious Discrimination”.
The panelists include Dr Prasert Suksaskawin, head of the Centre of Islamic Studies in Siam Technology College; Sathit Kumar, president of Ramakrishna Vedanta Association of Thailand; Dr Naw Kham La Dhammasami, founder of the Institute of Buddhist Psychology; pastor Virendra Arora of the Seventh-day Adventist Church; Ven Phramaha Wattana from Wat Mahathat; Pornthep SriNarula, president of NRI welfare society India, and Dr Husni Hamad, president of the Social Welfare Society.
The interfaith dialogue with religious representatives from Buddhism, Christianity, Islam and Hinduism will discuss the relationship between human being and the spiritual world in the context of the role of religion in making a peaceful society.