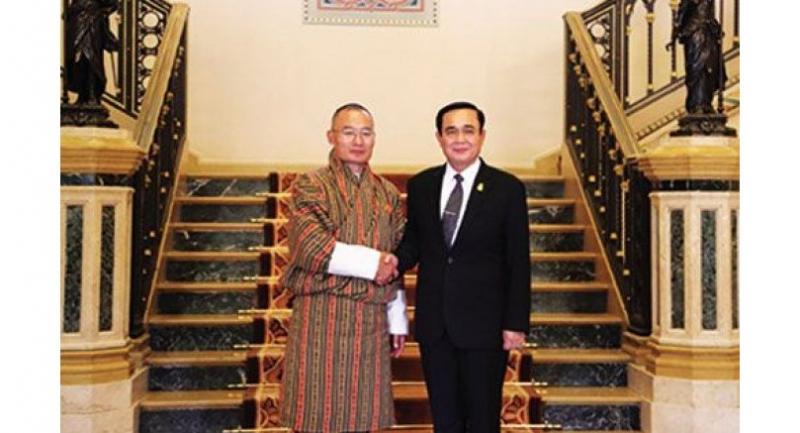 Buddha's teachings on ethics have direct relevance to human development

As a Vajrayana Buddhist state, the main influences on human development in Bhutan has come from two sources – governance and leaders, Prime Minister Tshering Tobgay said in his address to the 15th UN Day of Vesak Celebration at Mahachulalongkornrajavidyalaya University (MCU), Wang Noi, Ayutthaya, Thailand on May 25.

The prime minister delivered the keynote address on Buddhist contribution for Human Development. Lyonchhen said that the birth, enlightenment and passing of the Buddha all happened in the second month of the Buddhist calendar, which is known in Sanskrit as Vaisakha.

"Buddhism have influenced critically both the governance and its leadership in our country, and through these two institutions affected human development," he said.

Lyonchhen said that Buddhist values towards environment and sentient beings have shaped GNH's high emphasis on ecological integrity in Bhutan. "In the case of Bhutan, Buddhism has moulded our citizens' attitude to the environment and animals. Bhutan is one of the world's smallest countries, but it has undertaken one of the world's heaviest commitments to conservation. Bhutan is a biological hotspot."

Among his countless teachings, lyonchhen said that Lord Buddha's teachings on ethics have been of direct relevance to human development.

"According to Vajrayana Buddhism followed in Bhutan, human beings' experiences of themselves occur through three gateways of experiences: through their body, mind and speech," he said. "Lord Buddha's teachings about behavioural, verbal and mental actions that would lead to happiness and wellbeing are the main basis of human development in Vajrayana Buddhism. Human development depends on advancement in these three dimensions of experiences."

He stated that Bhutan is a Vajrayana Buddhist Kingdom and that both private and state Buddhist institutions are still vibrant and influential. "The support of lay people and the state is very strong for monks and priests," he said.

Citing a national survey on time use in 2015, he said people in Bhutan spent 36 minutes on average every day on mantra, prayers and meditation and this daily average increased to two hours 25 minutes a day for those over 60 years of age. "People spend more time on spiritual activities such as mantra and prayers as they grow older."

During the visit, Lyonchhen also called on his Thai counterpart Gen. Prayut Chan-o-cha at the Government House. Lyonchhen conveyed the warm greetings of His Majesty The King and thanked the Royal Thai Government for the warmth in which Their Majesties and HRH the Gyalsey were received in Thailand for the Royal Cremation Ceremony of His Majesty the Late King Bhumibol Adulyadej.