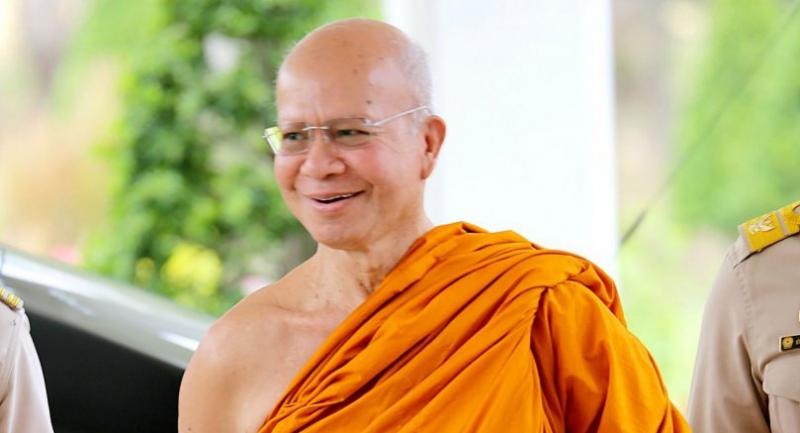 Germany declines to hand fugitive monk over to Thai police

GERMAN authorities are expected to make a decision in three days on whether to hand over a senior Buddhist monk wanted by Thai police in connection with a massive embezzlement scandal, Deputy Prime Minister Prawit Wongsuwan said yesterday.

Leading a team of Thai officers, national police chief Pol General Chakthip Chaijinda failed to take the fugitive, Phra Phrommedhi, into custody from German authorities, who detained the monk following his arrival at Frankfurt Airport on Friday.
Media reported that the monk had sought asylum in Germany, but to General Prawit, who is also defence minister with oversight of the police force, said an initial investigation found he had yet to submit his application.
“The German authorities wanted time to examine the case. Normally that takes about two months. Thai authorities have asked them to complete it within three days,” Prawit said.
Thai authorities have submitted details of allegations against the monk to their German counterparts, he added.
“The monk asked not to meet with Thai authorities,” the deputy PM said.
Thai expatriates living in Germany were believed to have aided the monk’s escape, Prawit said, adding that the preparations were being made “long ago”. Thai authorities are examining evidence regarding the people involved, he said.
The police team headed by Chakthip had flown to Frankfurt in the hope of escorting the fugitive monk back to Thailand today to face justice. They had booked 14 return seats on a Bangkok-bound Thai Airways flight, including one reserved for the monk suspected of embezzling state funds intended for temple development.
The suspect is now referred to by his lay name of Phra Chamnong Iam-intra, following a recent royal command to strip him and six other high-ranking monks embroiled in the embezzlement scandal of their monastic rank.
The police chief and his team are scheduled to arrive back in Bangkok from Frankfurt this morning, according to a police source. The team had been in Germany since Sunday on an urgent mission to retrieve the fugitive monk.
Meanwhile, Foreign Minister Don Pramudwinai said he had as yet received no update on the matter from the Royal Thai Embassy in Germany. He said his ministry was looking to see what it could do to resolve the situation.
On May 24, police raided three Bangkok temples with arrest warrants for seven senior monks accused of embezzling state funds. Phra Phrommedhi (Chamnong), former assistant abbot of Wat Samphanthawongsaram, and Phra Phromsitti, former abbot of Wat Sa Ket, managed to elude arrest, but Phra Phromsitti surrendered earlier this week and, on being denied bail, was defrocked and placed in custody.
Phra Chamnong, who fled first to Laos, was detained by German Immigration on his arrival at Frankfurt Airport on Friday. Some suggested he fled to Germany in hope of securing help from the Wat Dhammakaya movement.
The Dhammakaya movement has more than 20 temples or “coordination centres” in Europe. Seven of the centres are in Germany – in Berlin, Bavaria, Hamburg, the Black Forest in Baden-Wurttemberg, Heilbronn, Nordrhein Westfalen and Wat Phra Dhammakaya in Frankfurt.
Phra Chamnong performed religious rites at the Bavarian temple in 2011 and 2015, on the latter occasion also heading a committee conducting dhamma examinations for monks.