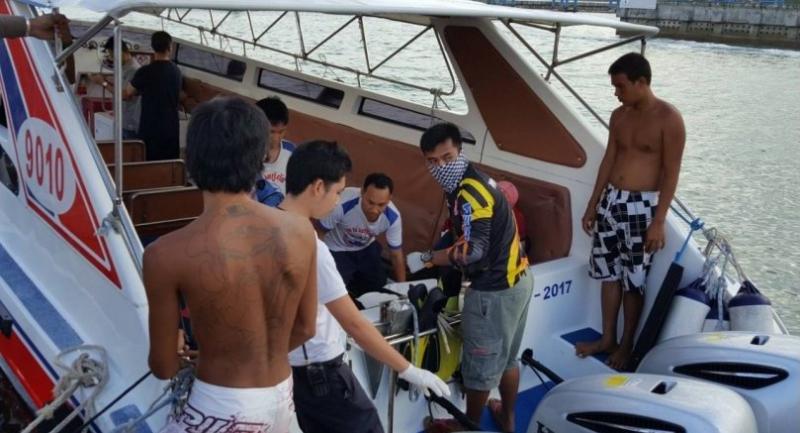 Chinese tourist drowns off Phuket islet after sneaking off from group

A Chinese tourist drowned and two others were injured when the three were hit by huge waves while swimming at an islet near Phuket island-province on Thursday evening, police said.

Police were alerted at 4.30pm of the accident and a speedboat brought the body of the Chinese man and the two injured men back from Koh Racha islet to Phuket’s Chalong Bay pier at 5.30pm.
The drowned tourist was identified as Su Wang, 31. The injured tourists, Liang Yu Lin, 29, and Pu Bin, 26, were rushed to Bangkok Phuket Hospital and declared safe.
Police said the three were among 35 Chinese tourists on a trip organized by Apple Trip Co Ltd. They arrived at Phuket on Wednesday and were scheduled to fly back home on Monday.
On Thursday, they were taken to visit and have lunch at Koh Racha. Their tour guides told police that the three finished their lunch before other tourists and strayed from their group without informing guides.
They then swam on the western side of the islet at Patok Bay without wearing life vests. Large waves pulled them underwater, and hotel lifeguards rushed to pull the two survivors out of the water while Su disappeared. His body was found hours later.
Deputy Phuket governor Thavornrat Kongkaew said the provincial administration was sorry about the loss of life and Phuket would coordinate with the Chinese consular office to provide help to the victim’s family.
He said the province would instruct tour companies to step up safety measures for foreign tourists and to make sure that the number of guides are adequate to properly supervise tourists.
Thavornrat said the provincial administration has four lifeguards on Koh Racha.