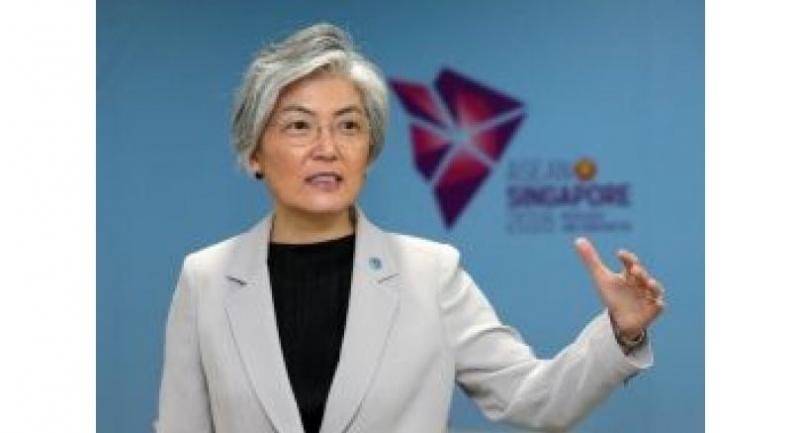 South Korean Foreign Minister Kang Kyung-wha strived on Wednesday to publicize the government's efforts to expand cooperation with Southeast Asian countries, as their annual high-level gathering is underway in Singapore.

She had a series of bilateral talks with her Malaysian, Myanmar, Vietnamese, Cambodian, Brunei and Laotian counterparts on the sidelines of the annual ASEAN foreign ministerial sessions.
Last year, the Moon Jae-in administration announced the "New Southern Policy" aimed at improving relations with the Association of Southeast Asian Nations as well as India and Pakistan.
Government officials say it's not just rhetoric but a real policy priority, presenting three Ps -- people, prosperity and peace -- as a slogan.
South Korea has long made efforts to diversify its diplomatic and economic partners, but the liberal-minded Moon has sought notably to reduce Seoul's dependence on traditional trade partners such as the United States and China.
In her bilateral talks with Malaysia's top diplomat Saifuddin Abdullah, the first official activity in her weeklong tour here, Kang introduced the Asian diplomatic initiative.
"I can only assure you of my very best cooperation and support for our engagement here but also of course at the bilateral level for South Korea-Malaysia relations," she said at the opening of the meeting held at the EXPO Convention and Exhibition Center.
It's the venue for the 51st ASEAN Foreign Ministers' Meeting and related sessions that opened on Tuesday.
The Malaysian minister said his government also values ties with South Korea and supports peace on the peninsula.
He talked about K-pop singers, who are popular in Malaysia, as an example of how Korean culture is influential there.
Kang also had a one-on-one meeting with Myanmar's Minister for International Cooperation Kyaw Tin.
She briefed him on South Korea's regional peace campaign highlighted in the two recent inter-Korean summits followed by the landmark talks between the leaders of the U.S. and North Korea.
She also reaffirmed Seoul's commitment to expanding development cooperation with a nation with great economic potential.
The Myanmar minister requested support for the country's youth hoping to launch startups.
Kang then met with Vietnamese Foreign Minister Pham Binh Minh.
Citing progress in the Korean peace initiative, she told him, "It's certainly a time of great change on the Korean peninsula, and this is possible because of the support that we had from Vietnam and other members of ASEAN and certainly the international community."
The Vietnamese official responded, "Our position is very clear that we support the denuclearization of the Korean Peninsula."
Kang also had bilateral talks with her Cambodian, Brunei and Laotian counterparts on bilateral ties and regional issues.
The Southeast Asian nations pledged full support for Seoul's efforts to denuclearize the peninsla and create a peace regime.
Singapore is the rotating host of this year's ASEAN gatherings.
The ASEAN bloc, with a population of 630 million, is South Korea's second-largest trade partner, with the two-way trade volume totaling $149.1 billion in 2017, rising from $118.8 billion the previous year.