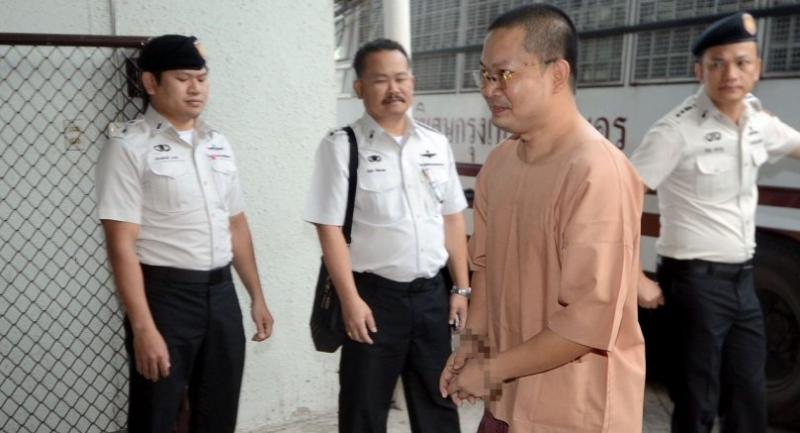 Wiraphon Sukphon, known as Luang Pu Nenkham while he was a monk, was on Thursday sentenced to 114 years in prison for fraud, money laundering and violating the Computer Crimes Act.

He will, however, serve no more than 20 years, the maximum period allowed under the law.
The judge at Bangkok’s Ratchadapisek Criminal Court also ordered Wiraphon, 39, who was already being held at Bangkok Remand Prison, to repay 29 fraud victims a combined Bt28,649,553.
He was convicted of using his status as head of the Wat Pakhantitham forest monastery in Si Sa Ket between February 2009 and June 2013 to attract donations to build what he described as “the world’s largest Buddha statue” in jade and gold, as well as for other projects.
He solicited donations in person and via his website.
Ultimately 29 donors sued him for the money they’d given him.
The judge said Wiraphon had taken advantage of people’s faith and misused the donated money to buy 10 luxury cars and live extravagantly. The Civil Court earlier ordered assets worth more than Bt43 million confiscated.
He was sentenced to three years in jail term on each of the 29 counts of fraud, totalling 87 years.
On 12 counts of money laundering he was sentenced to 24 years.
Another three years’ prison time was added for violating the Computer Crimes Act.
Wiraphon still faces another trial in criminal court for allegedly raping a girl under 15 over whom he had unofficial custody in 2000-2001. A source at the court office said that ruling would come in October.
Wiraphon, extradited from the United States in July last year, was known as “the jet-set monk” after a video circulated in 2013 showing him aboard a private jet holding a Louis Vuitton bag and wearing brand-name sunglasses.
Another clip showed a man who looked like him lying beside a woman, although Wiraphon maintained it was not him but his brother.