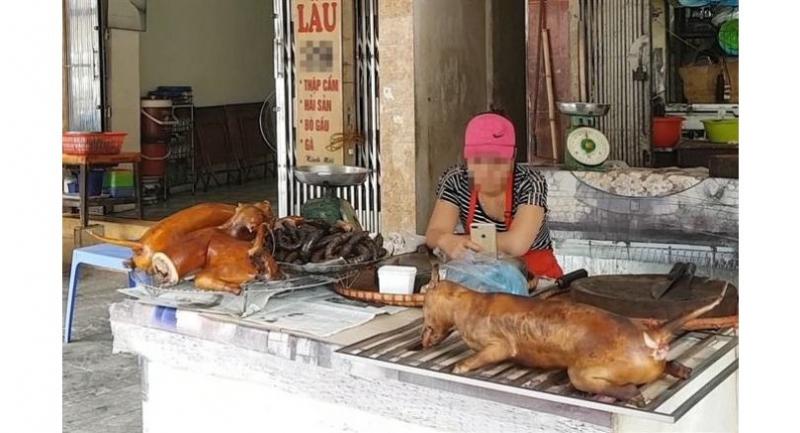 An international animal welfare charity has welcomed the news that the city government is considering banning the consumption of dog meat in certain areas.

Humane Society International says it’s time for those who make a living from slaughtering and selling dogs to look for another profession, and understand the dangers of selling the meat.
This week Hanoi People’s Committee issued a statement saying the practice of dispatching, trading and eating dog and cat meat was cruel and left a bad impression on tourists and expats.
They also pointed to the possibility of diseases that could affect people who eat infected meat.
Dog meat, either raw or cooked, can be found in markets and restaurants all over the capital. There are reports of dogs being stolen from homes and sold for consumption.
Embracing the reputation of a “civilised and modern city”, Hanoi authorities hope the practice will stop.
Stalls selling raw dog meat on Tam Trinh Street in Hai Bà Trưng District are still busy despite the statement.
But Thẩm Thị Hồng Phượng, country director of the Humane Society International, believes those who make a living from catching, slaughtering, transporting and selling dog meat should better understand the consequences surrounding the trade.
“A survey carried out in 2016 revealed that people in the North eat more dogs than people in the South, so there is a transportation trade to carry dogs from the South to the North,” she said.
“About 20,000 dogs are transported every month from the South to the North. Because of that, there is a danger of rabies spreading.”
She estimates around one per cent of all dogs in the country carry the rabies disease.
She says her organisation wants to help with education, along with re-homing dogs that were in the past destined for the dinner plate.
“Once they have better knowledge of disease control, in the humane ways of treating the dogs, I believe that they will change themselves to a better or a different livelihood,” Phượng added.
“For so many years they have had income from that business. I believe those involved in that business are not only the restaurant owners but also the traders, the transporters, the vendors.”
But Vũ Hữu Nam, a butcher who works in Hanoi insists the meat is not only safe, but delicious as well.
Nam has worked in the industry for 20 years, and can still be seen chopping up dog meat at a restaurant on Tam Trinh Road.
“It’s normal to eat dog meat,” he insisted. “It has been a Vietnamese specialty for years. It’s still business as usual. People still eat it.”
And he says he does not think the authority’s call would affect those who work in the industry.
Some people believe the next generation of Hanoians are not interested in the tradition and see dogs as pets rather than food.
Trần Huy Tùng, 22, said: “I think we should protect dogs. I myself don’t eat dog meat and don’t like it. Not many young people eat dogs now because they consider dogs as their pets and close friends.”
Security guard and dog owner Quản Đức Hùng, 71, added: “We should ban it. Dogs are wise and close to human beings. We should not eat them.”
Fellow security guard Nguyễn Hoàng Linh, 62, is more concerned about the potential health risks of eating the animal.
“I find eating dog dangerous”, he said. “Slaughtering a sick dog may pose a risk of contracting a disease.”
However, he thinks eating dog is a personal choice and should not be banned.
Officials in Hanoi want the practice outlawed in certain areas, especially tourist spots, by 2021.