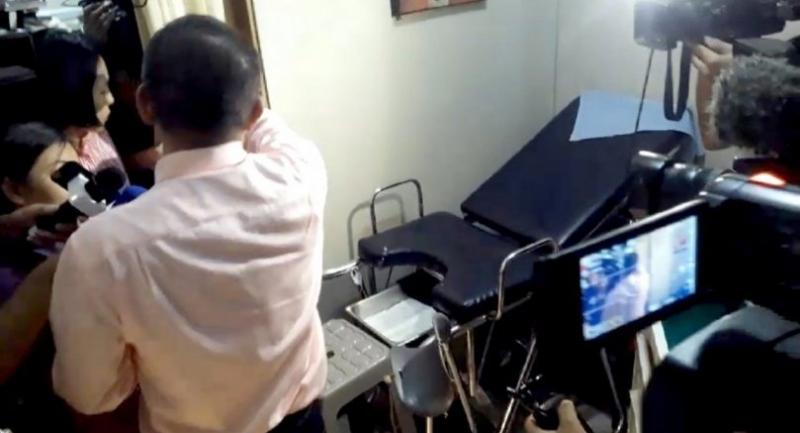 A GYNAECOLOGIST accused of molestation and rape on Tuesday vowed to continue working, saying he wanted to continue serving patients in need of medical assistance.

In his first interview since the allegations were aired, Chakrapong Leelaporn, 53, said the scandal had only slightly affected him and that many people had conveyed their support to him despite the accusations.
“I don’t hold any grudges or hatred against anybody and will not seek lawsuits against anyone. I will continue working to pay back to the country as I studied by using taxpayers’ money and have worked in a public hospital,” Chakrapong said.

Meanwhile Panadda Wongpudee, founder of a charity organisation, led six alleged victims to petition the national police chief to seek his help in the case.
Chakrapong told reporters that he would fulfil his obligation to give lectures to foreign medical students at Nakhon Sawan Pracharat Hospital, where he works as a government official.
He has been accused of molesting and raping patients at his private clinic in Nakhon Sawan’s Muang district.
One woman, whose name has been withheld, told police the doctor had raped her during a gynaecological examination at his clinic, an accusation Chakrapong denies. Despite the scandal, people were still seen waiting for medical examinations at his clinic on Tuesday.
Chakrapong said on Tuesday that the accusation would affect him personally only slightly but would have a more profound effect on other gynaecologists , who would find it difficult to carry out their duties as a result of the scandal.
He revealed that he had already spoken about the case with the hospital’s director, who expressed concern about it but sympathy for him.
“I will not take days off following the scandal as there is a large group of patients waiting for medical attention,” he said. “In fact my clinic has been fined Bt10,000 for not having enough doctors’ assistants.”
Some of the complainants have spoken anonymously about the |scandal, saying the attacks happened when they were alone in the room with the doctor, without any nurses or medical assistants being present.
Chakrapong said it was possible that some patients might have misunderstood his direct comments and the physical contact he made, which was essential during medical examinations. He said other patients from many provinces had not been deterred by the publicity and still flocked to his clinic every day.
Those patients, he said, extended their support for him and expressed their confidence in him being able to continue working.
The accusations came to light after female lawyer Saranya Wangsukcharoen, activist Achariyasap Ruengrattanapong and Panadda joined ranks to gather information and evidence about the allegations.
Panadda on Tuesday went to the national police headquarters in Bangkok and submitted a petition to national police chief Pol General Chakthip Chaijinda, asking him to help investigate the accusation.
She claimed that about 50 patients from Bangkok and other provinces had come forward to claim criminal wrongdoing by the doctor dating back many years.

Achariyasap, meanwhile, visited the “Dr Chakrapong Clinic” in Nakhon Sawan on Tuesday together with the provincial police commander.
The activist said before visiting the clinic that he suspected that there were two possible scenarios for what really happened.
“There may be some patients who agreed to have sexual relations with the doctor but took opportunity to blackmail the doctor after the scandal broke out,” he surmised.
“The second possibility is that the molestation and rape really happened in the clinic.”
He also suggested that the doctor could have committed rape but settled the case with the help of a police officer who took a bribe.
He revealed chat messages, reportedly between the doctor and a former female patient, which appeared to show that their relationship went beyond doctor and patient.
According to Achariyasap, the doctor told that patient that he would take life-long care of her and bought her souvenirs from abroad.