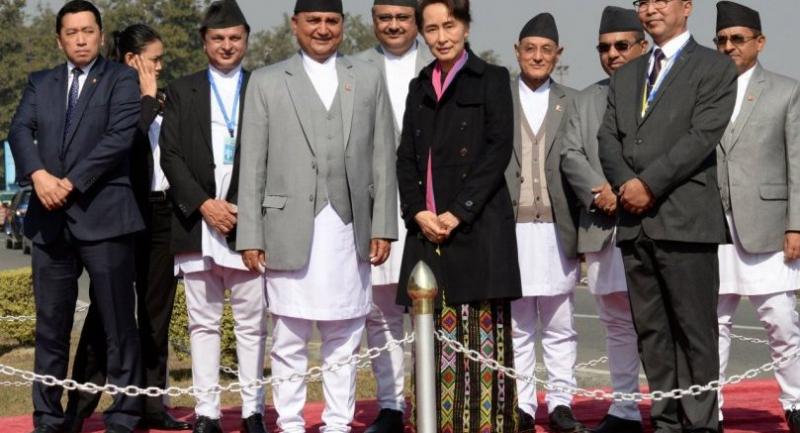 Myanmar's civilian leader Aung San Suu Kyi, who is facing international criticism over her country's crackdown on Rohingya Muslims, called Saturday for "a culture of peace" to end conflict between communities.

The Nobel Peace prize winner did not mention the Rohingya crisis -- which has led the United Nations to call for a genocide investigation -- in her keynote address to an international meeting organised by a group linked to the Unification Church.

"At the basis of conflict is ill-will which seeks to hurt and to destroy and thus to open the way to conflict, which in turn spews out an ever-renewing cycle of hate and fear, snuffing out the light of peace," Suu Kyi said.

Suu Kyi called for cooperation between nations to seek peace and mutual prosperity.

"Only by promoting a culture of peace in this world of interdependence will it be possible to create harmony between diverse countries and societies," she said.

Suu Kyi, whose position of state counsellor in Myanmar is considered the equivalent of a prime minister, has faced a wave of condemnation since Myanmar launched its military crackdown on the Rohingya in August 2017.

More than 700,000 have fled Myanmar's Rakhine state to camps in neighbouring Bangladesh. Many told horrific stories of widespread killings, rapes and villages razed to the ground.

Myanmar's military insists it only targeted Rohingya militants and Suu Kyi has deflected all criticism.

Other top officials at the meeting, which was accompanied by boosted security in the Nepali capital to head off protests, did not mention the conflict which has overshadowed many of Suu Kyi's international appearances.

Her speech at the Kathmandu meeting, backed by the Universal Peace Foundation, came a day after Paris announced will it will strip her of her honorary freedom of the French capital over her failure to speak out against the Rohingya crackdown.

The British cities of Glasgow, Edinburgh and Oxford have taken similar action against Suu Kyi over her refusal to condemn the military violence.

A UN rights team found evidence of widespread murder, rape, torture and arson, and called for top generals to be prosecuted for genocide, war crimes and crimes against humanity.

About 300 Rohingya live in Nepal and one of the refugee community based in Kathmandu, who requested anonymity, called for Nepal to raise their issue with Suu Kyi.

"We are suffering. I think if she wants to help us, she can," he said.