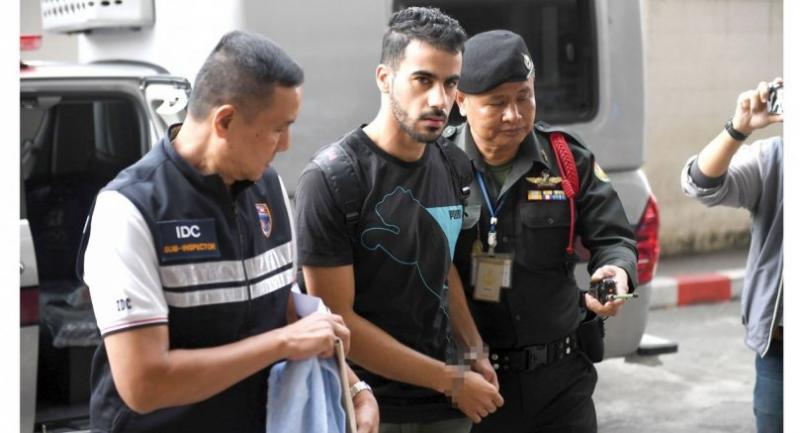 THE FUTURE of an ex-Bahrain national footballer, who has been granted Australian refugee status, was left hanging in the balance after a Thai court yesterday ruled in favour of detaining him for another 60 days pending an official extradition request from his native country.

Hakeem al-Araibi, was arrested at Suvarnabhumi Airport on November 27 at the request of Bahraini authorities. He was on a stopover in Bangkok on his way back to Australia after a holiday with his wife.

Hakeem Alaraibi (C), a former Bahrain national team footballer with refugee status in Australia, is escorted by immigration police to a court in Bangkok on December 11, 2018. // AFP PHOTO
“I don’t want to go back to Bahrain – I want to go back to Australia. I didn’t do anything in Bahrain,” the 25-year-old said before being escorted to court. The extradition process could be lengthy and complicated – al-Araibi could be detained in Thailand for a longer period than anticipated and the trial verdict is unpredictable. The court, meanwhile, said the arrest was legitimate because it had been requested by its Bahraini counterpart, which accused the footballer of crimes involving arson, illegal gathering and possession of inflammable objects in 2012.
Al-Araibi fled to Australia and was granted refugee status last year. However, he was convicted in absentia in 2014 on charges of vandalising a police station in the Gulf state, even though al-Araibi insists he was playing a match overseas at the time of the alleged offence.
The Australian government and human rights organisations have, meanwhile, called for his release, with the Australian Foreign Minister Marise Payne calling for his “immediate return”. The Australian ambassador to Thailand has also raised the issue with the Thai immigration bureau, demanding that al-Araibi be released immediately as he is protected under the United Nations refugee treaty. They fear that he may suffer torture if he is extradited to Bahrain. The footballer has said that he was arrested and beaten at the start of the Arab Spring protests in Bahrain in 2012 and was granted refugee status in Australia five years later. He now plays for the semi-professional club Pascoe Vale FC in Melbourne.

Bahraini soccer player with Australian refugee status Hakeem Al-Araibi (L) speask to the media as he is escorted into the Criminal Court by authorities in Bangkok, Thailand, 11 December 2018.// EPA-EFE PHOTO
According to AFP, al-Araibi begged for the court proceedings to be halted before entering the court building yesterday.
“Immigration Thailand and immigration Bahrain are working together to send me back to Bahrain. But Australia is stopping them. Please stop them!” al-Araibi was quoted as saying. “I don’t want to go back to Bahrain – I want to go back to Australia. I didn’t do anything in Bahrain. I’m a refugee in Australia.”
Officials from the Australian Embassy were also present at court yesterday.
His lawyer Nadthasiri Bergman told reporters she believes there is a good chance he will not be extradited because she has evidence he will face abuses back in his home country.
As she countered the public prosecutors’ request to detain her client for another two months, Bergman told the court that al-Araibi’s arrest was illegal and there was no justification for his detention.
She added that even though the court had ruled that his arrest was legitimate and the next step would be an extradition trial, she would certainly take steps to fight the extradition.
She is also seeking bail for the footballer. The Department of International Affairs at the Office of the Attorney-General has requested al-Araibi’s detention for 60 days in line with the extradition law.