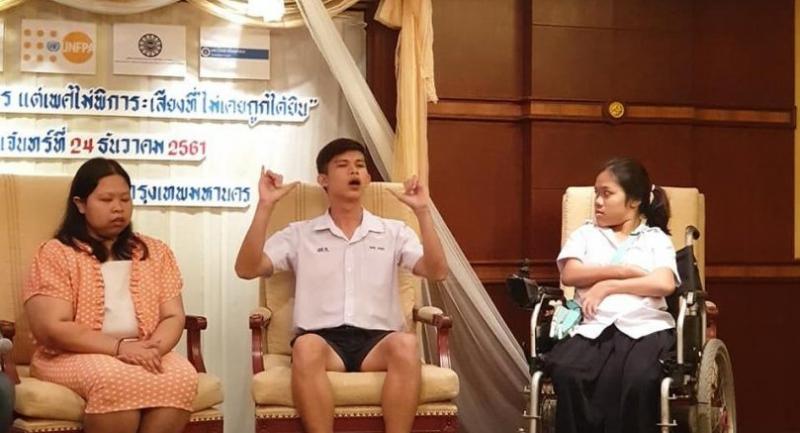 The disabled need sex-ed as they have feelings too

MOST PEOPLE with disabilities drop out after primary school, without learning enough about safe sex.

Of the 2 million disabled people in Thailand, 55 per cent are in primary school, while only 7 per cent, 1.42 per cent, and 1.5 per cent make it to high school, vocational school and college respectively, according to data released by the Social Development and Human Security Ministry. These figures have raised concerns that people with disabilities do not have equal access to sex education.
Sex education is necessary to prevent unplanned pregnancies, even though data regarding teenage pregnancy among people with disabilities is non-existent, Dr Wachara Riewpaiboon, dean of Ratchasuda College, Mahidol University, said at a seminar.
The event, held on Monday, had been organised by the United Nations Population Fund, Thailand Research Institute for Empowerment of Persons with Disabilities (TRIP), Planned Parenthood Association of Thailand (PPAT) and Mahidol University.
Kamolchanok Boonyaketwatthanakun, president of the Thai Youth Club of the Blind, said there is an urgent need for schools to equip all primary students with knowledge about condoms, birth control, menstruation and sanitary napkins early on.
Also, she said, primary students with disabilities should not be left out of sex-ed classes because they too have sexual desires like everybody else.
“When a disabled person buys birth-control pills, people look at them and ask ‘what will a blind person do with birth-control pills?’
“Blind people have all the feelings. We just can’t see,” she said.
Disabled people also face other problems. For instance, many women with mental disabilities cannot become mothers because they have been sterilised, while some suffer sexual violation and bias, said Montien Boonton, president of Thailand Research Institute for Empowerment of Persons with Disabilities (TRIP) Foundation.
He also pointed out that though official figures show that only 3 per cent of the Thai population is disabled, the real figure is much higher. In fact, the World Health Organisation put the number at 15 per cent in 2011. “This is possibly because parents ‘choose’ to believe their children are not disabled,” he said.
“Many families don’t believe their sons and daughters have [sexual] feelings,” said Athithan Suebkraphan, who has mobility impairment. “Many people want to have a family, but their parents object saying raising children is difficult.”