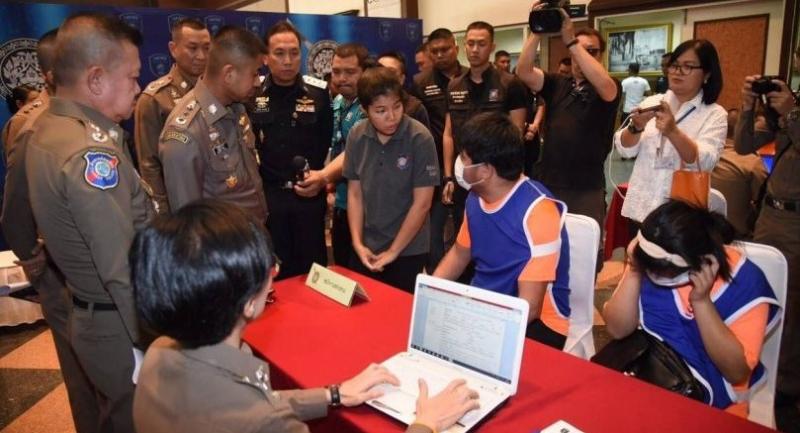 EVEN AS THE country is poised to celebrate the New Year, police continue to bust wrongdoers.

Four recent cases were shared with media by Immigration police chief Pol Maj-General Surachate Hakpal in Bangkok on Thursday. They included the arrest of “Net Idol” fraud suspects, the arrest of an alleged con artist using the lure of jobs overseas, the crackdown on six Chinese beggars roaming Bangkok tourist attractions, and the nationwide searches that netted eight suspects on child pornography-related charges.
In the first case, “Net Idols” Watcharaporn Polsan, 25, and Kannikar Phandu, 19 were apprehended mid-month on an arrest warrant issued by the Udon Thani Court. They were wanted for alleged public fraud and a violation to the Emergency Decree on Loans of Money Amounting to Public Cheating and Fraud.
The duo and one elusive accomplice allegedly duped 300 people – many of whom were the followers of the two women’s high-traffic Facebook pages that made them “Net Idols” – of some Bt50 million for investment with a promise of high returns in July. However, they failed to pay a dividend or return the capital to victims.
In the second case, former university lecturer Prin Sopa was apprehended on Thursday for allegedly milking Bt1.7 million from 20 people with false promises of jobs in Australia. The victims, facing repeated postponements for getting their money back from Prin after they were told their visa applications were rejected in June, filed police complaints in November. Police initially charged Prin with fraud and inputting false information into the computer system accessible by the public.
Police have also warned Thai job seekers to apply for overseas positions via legal agencies, to pay fees only by bank transactions so as to have payment receipt evidence, and to alert the Department of Employment if they still cannot travel within a month.
In the third case, two Chinese women – Lu Kuaineng, 27, and Qin Jianglin, 21 – and four Chinese men – Wang Laibo, 30, Luo Xin, 31, Qin Daoyu, 46, and Ren Hecheng, 29 – were arrested this week for allegedly pandering in tourist attractions in Bangkok. They allegedly earned up to Bt3,000 daily and split the cash between them at a Sutthisarn hotel. They are also accused of overstaying their visas. Police are also investigating if this alleged beggar gang had committed any human-trafficking crimes.
In the fourth case, the Thailand Internet Crimes Against Children Task Force (of the Royal Thai Police) joined with the Department of Special Investigation, the UK police and related agencies to arrest eight suspects and confiscate 25 examples of evidence containing more than 100 files of child pornography during the December 26 searches in 18 locations in 12 provinces, said Surachate. The provinces were Chiang Mai, Phayao, Sing Buri, Kanchanaburi, Nonthaburi, Bangkok, Phuket, Roi Et, Surin, Nakhon Ratchasima, Chon Buri and Rayong.