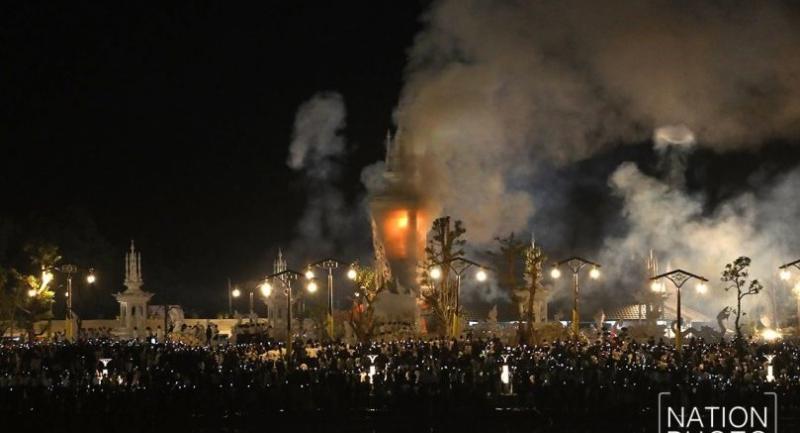 THOUSANDS OF people paid their final respects to one of the country’s most revered monks, Luang Phor Koon Parisuttho, in front of his elaborate crematorium in Khon Kaen province last night.

Also known as Phra Thep Witthayakhom, he passed away at age 92 on May 16, 2015 and, in accordance with his written will, his body was donated to Khon Kaen University (KKU) for medical studies. His body left the KKU compound only yesterday for the temporary and beautiful crematorium, which was especially built for his royally sponsored cremation ceremony.
Buddhists gathered along the route used for the procession of Luang Phor Koon’s body to bid their final farewell. Luang Phor Koon, who spent 70 years in monkhood, is probably best known for his signature sitting style and for always speaking the language of commoners.

People rush to gather souvenir coins thrown from a truck as part of the funeral procession of much-revered monk Luang Phor Koon Parisuttho in Khon Kaen yesterday.
The public usually saw Luang Pho Koon squatting, his bottom never really touching the seat. When he delivered sermons, his words were unrefined yet easy to understand. When he preached about Buddhism, he went straight to its core: “Don’t commit any sin, do good deeds”.

Monks from different temples gather yesterday at Wat Bai Rai in Nakhon Ratchasima’s Dan Khun Thot district – where Luang Phor Koon Parisuttho used to serve as abbot.
He handed out amulets to people of all classes regardless of their status. In his lifetime, he also made sure money from sales of amulets by his Ban Rai Temple – where he had served as the abbot for decades – went to good causes such as to hospitals, schools, the KKU and more.
The Mahachulalongkornrajavidyala University, which had received financial donations from Luang Phor Koon for the construction of its Nakhon Sawan campus, organised a chanting ceremony there in tribute to the late monk yesterday.
Luang Phor Koon was one of the monks HM the late King Bhumibol Adulyadej visited.

When Luang Phor Koon was still healthy, he usually whacked people asking for his blessings on the head with his cane.
Estimates of funds raised by Luang Phor Koon for charitable causes vary, but apparently the amount was to the tune of billions of baht.
As his health deteriorated, the monk drew up a will that truly reflected the mind of the person who clings on to nothing. He requested that his body be cremated and the ashes scattered on the Mekong River to avoid his mortal remains becoming a “burden to others”, to ensure no one took advantage of them, and to prevent conflict among his disciples.
His ashes will be collected and taken to riverside Nong Khai province for scattering into the Mekong River today.

The ritual related to Hassadeeling Bird was also carried out in line with northeastern beliefs, before a grand dance to send the monk’s soul to heaven.
At 10.15pm, the actual cremation was held.